Small efforts can protect farmers from pesticides. insights from Zambia

By Joseph Goeb - The Conversation 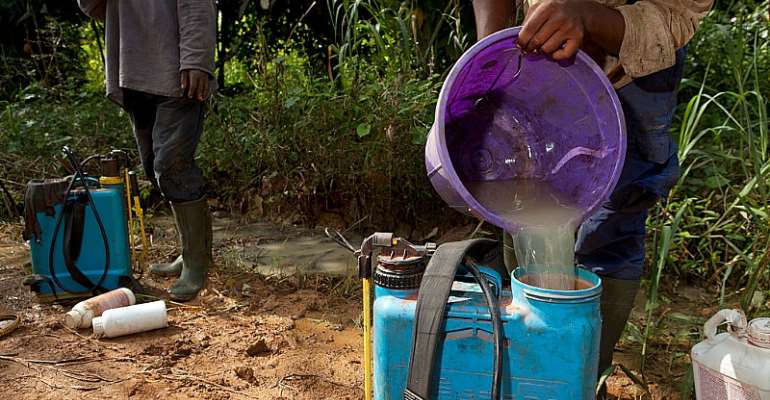 An insecticide being mixed. - Source: Photo by Ann Johansson/Corbis via Getty Images

Vegetable production, tomato production in particular, is an important source of income for many smallholder farmers in Zambia. It can provide them with gross margins that are much higher than maize, the dominant field crop. But these higher returns come with nearly ubiquitous crop loss risks from pests.

Two commonly reported pests are bollworms and nematodes. These can dramatically reduce the amount of tomatoes that meet quality standards.

To address this, farmers in Zambia are starting to use more pesticides. A trend that can be seen in many African countries, such as Ethiopia and Uganda.

Zambian farmers have access to and often apply several extremely toxic pesticides including Monocrotophos, Methamidophos, and Umet. This subjects them to acute and chronic health risks.

I witnessed the rapid increase in pesticide use while living in rural Zambia. But with limited government resources available for agricultural extension, there was almost no formal education or advice offered to farmers. They were learning about toxicity – and the corresponding health and environmental risks of pesticides – through experience.

My colleagues and I carried out a study over 7 months that explored whether farmers changed their pesticide choices to less toxic options or adopted risk-mitigating technologies (such as protective gloves or masks) based on new information. We conducted this study with 512 tomato farmers.

These training programs may be an attractive alternative to larger, more expensive efforts. They can have large, tangible benefits for the environment, farmer incomes and health, while also being relatively low-cost and easy to implement.

Pesticides have well-documented environmental externalities ; they can contaminate soils and waterways, and negatively affect fish and other non-target organisms. Further, pesticides have many health risks including severe, long-term illnesses like Parkinson's disease and neuropsychological effects .

But from a farmer's perspective, high use rates of pesticides are easily explained by increasing farm profits as a result of reduced damage from pests and diseases.

But there are ways in which farmers can continue to use pesticides while protecting themselves.

Pesticides all have toxicity classifications which summarise the potential threat they pose to human and environmental health. Less toxic pesticides pose smaller risks and, in many cases, these risk differences across toxicity classes are tremendous.

For instance, in Zambia, farmers faced with pest damage on a crop typically have multiple pesticide options to choose from. Each of these may have similar efficacy in controlling their pest problem, but different toxicity classifications.

Generally speaking, over the past 30 years pesticides are being created to deliver the same or greater efficacy but at lower toxicity levels. This means that, by simply by choosing the less toxic option, farmers can more often reduce the health risks to themselves and the environment without compromising on the benefits in pest protection.

Farmers can also reduce their health risks from working with pesticides by wearing personal protective equipment which limits their exposure to the chemicals. However, there's evidence from various countries including Zambia , that shows that farmers rarely wear them.

The literature often calls for better information to help improve farmer pesticide safety. So we wanted to see if a small intervention would help.

We worked closely with local government extension agents from the Ministry of Agriculture and Livestock to design and implement a low-cost farmer-to-farmer training programme. This taught farmers about pesticide toxicity, personal protective equipment, pest-control properties, and other safety information.

To assess the impact of information, we conducted interviews before and after training. These collected data on farmer knowledge, pesticide use, and safety practices. We also collected data on pesticide choices and identified how much farmers were willing to pay for protective gear.

Even before the training, farmers demonstrated a solid knowledge of general pesticide risks. They also knew of protective equipment and how to limit their exposure. But there was a clear knowledge gap in pesticide toxicity though not exactly where we might have expected.

Farmers did not underestimate pesticide health risks, they over-estimated them for many products by perceiving all pesticides to be equally and extremely dangerous. We often heard the phrase “poison is poison”. This implied that, to many farmers, using less-toxic pesticides had near zero benefits as the perceived health and environmental risks were the same across toxicity classifications.

Our results show that the training improved farmer knowledge of pesticide toxicity and corrected the misconception that all pesticides are equally toxic. More importantly, the programme led to behaviour change with more farmers opting for less toxic products.

However, the training had an insignificant effect on demand for personal protective equipment. This is because it's uncomfortable to use (particularly in hot climates), costs money and they don't last long. Farmers were reluctant to pay this recurring expense, even though it was relatively small.

In contexts similar to this, where farmers have access to many pesticide products, poor access to extension services and a weak understanding of the relative health risks across toxicity classes, we encourage governments and NGOs to consider similar, low-cost extension programmes. These will help to improve farmer knowledge when it comes to pesticide toxicity and promotes substitution to less toxic products.

More Article
Modern Ghana Links
Daytime sightings of elusive aardvarks hint at troubled times in the Kalahari
Extreme heat is a threat to lives in Africa, but it's not being monitored
Ngozi Okonjo-Iweala: how global and local experience would play out in WTO top job
Jean Mensa Forgot; She Could Have Aborted The 2 Kids. She Might Have Had With Government!
Once Sacked Twice Learnt; Amidu – Cynthia Reunion Ends With Her As Interim Special Prosecutor
Chemical Science And Chemical Technology Can Play A Major Role In Developing A New India — Says Padma Vibhushan Prof M M Sharma
The Kenyan film director taking on the world -- with positive stories of black life
Pasha 88: Lockdown and young people living on the streets of Harare, Zimbabwe
Trump's legacy in Africa and what to expect from Biden
Dossiers Quotes Coronavirus
TOP STORIES