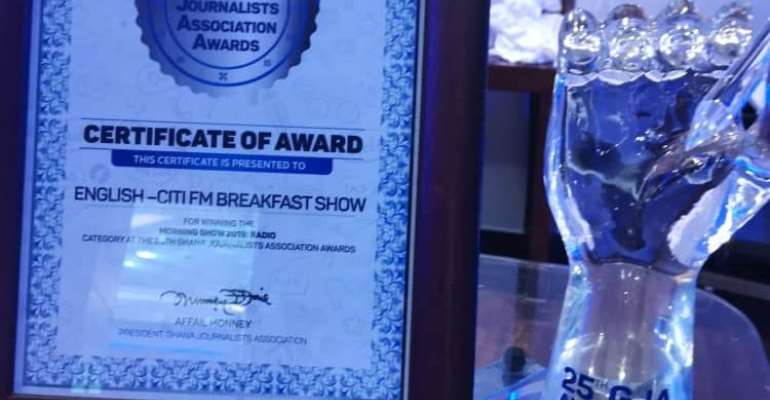 Citi FM’s Citi Breakfast Show has been announced the morning show of the year 2019 by the Ghana Journalist Association (GJA).

This is the fourth time in a row the Citi Breakfast Show has picked up such award.

At the same awards ceremony, Citi FM was adjudged the best English radio station in Ghana for 2019.

This is the second time the station is winning such award. Citi FM won the same award in 2018.

About the Citi Breakfast Show

The Citi Breakfast Show is Citi FM’s flagship morning talk show that airs from 6:20 am to 10 am with Bernard Avle, as the host.

Bernard and his team have gained public respect in the last decade by exploring, questioning and presenting a morning show that delves into current affairs and matters of importance often overlooked in the excited babble of socio-political news.

The Citi Breakfast Show has won recognition for its nationally relevant work in promoting Ghanaian business and economy, ending Galamsey, and more.

Host of the show, Bernard Avle was also adjudged the 2017 Journalist of the Year at the 23rd edition of the Ghana Journalists Association (GJA) Awards.