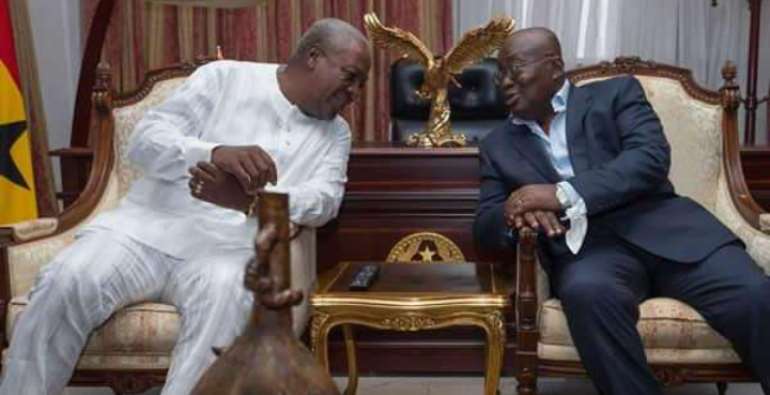 Former and current presidents of Ghana

Post-independence, the voting culture of Ghanaians is an issue that should make well-meaning citizens throw up. It's sickening. We have absurd reasons for voting for a political party and it seems we regret immediately after the party takes office and begins amassing the country’s wealth themselves and neglects the main reason they were put in power. But all it takes is another four years, another election to repeat the same mistake again. Ghana deserves better.

We have the tendency of blaming politicians for the waste created for the past 60 years but we miss the important point, who has been putting the same kind of politicians into power over the 60 years? Who votes for their promises and when they come into power and fail to deliver, who goes back to the polls and repeat the same mistake again?

The prominent voting populace has outrageous reasons for which they vote. Some vote because of political parties and not policies. Others vote because they know if party 'A' is in power, they will get their fair share of whatever the party loots. And when they come in, they sell us all, because they know that you are easy to convince and confuse and you forget things easily.

It is clear there are no differences between the politicians and the Ghanaians who put them there. Our leadership is an image of the citizens. How far they can think for themselves, how they see things and their reasoning abilities. It is clear per our leaders over the years that the majority of voters are not ‘well’ and their unwellness is causing the country.

Things have gotten from bad to worse in the case of voters. And as voters keep misplacing the reason for which they go to the polls, politics and politicians keeps taking us down the ditch. We are at a point of no hope. No hope for politicians and no hope that voters will ever change. In a real sense, Ghana deserves better than what the NPP and NDC are giving and promising us. Is it that we don't see or it's because we have no choice?

How did the elephant make himself king of the forest? How come the umbrella is all of a sudden a prophet? We sway the future with our thumbs. Giving free meals and bringing down hell, with party colours blinding our sight. We lack the authority to think for ourselves, so how do we even safe ourselves?

Bottom line
If we could only learn from history, we would know that politics cannot save us now. They can't even save themselves. So instead of wasting time waiting for them to get it right, instead of blaming them, instead of sacrificing ourselves and our sons for them, let take our lives into our own hands and save ourselves before it's too late.

This is not the first time I’m sounding this trumpet. Anyone who follows this column knows that this is basically what I do here. But since another election is coming and they have started telling you things, I’m here to remind you, this is not their first time.