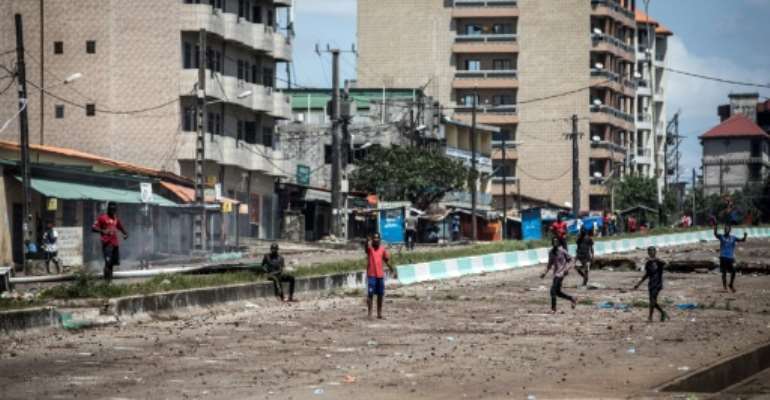 Guinea mobilised the army as clashes broke out in the capital Conakry and other cities. By JOHN WESSELS (AFP)

Guinea's President Alpha Conde appeared headed for re-election on Friday, initial results rejected by the opposition showed, as the army was mobilised amid fresh clashes

With tensions mounting after days of post-vote violence, figures released by the election commission late Thursday showed the 82-year-old incumbent, who is seeking a controversial third term, was the clear leader in Sunday's first round election.

Guinea mobilised the army as the new clashes broke out in the capital Conakry and other cities between security forces and supporters of opposition candidate Cellou Dalein Diallo who claimed victory after accusing the government of "large-scale fraud".

It did not declare a winner, but results showed Conde with more than 2.4 million votes, well ahead of Diallo with 1.2 million.

"It is out of the question to accept the false results that the CENI is proclaiming in favour of Alpha Conde," Diallo told AFP by telephone on Friday.

Guinea has been in a deep political crisis for the past year, with mass protests against Conde's re-election bid violently put down and dozens of people killed by security forces.

A police officer throws a stone at protesters during a mass protest on Wednesday. By JOHN WESSELS (AFP/File)

Since Monday, violence in cities across the country has left around 10 people dead, according to the authorities, while the opposition says 27 people have been killed.

In the suburbs of Conakry, youths in shorts, T-shirts and flip-flops on Friday clashed with police officers or gendarmes in riot gear, in streets cut off by downed lampposts or burning rubbish, and littered with rocks, AFP journalists said.

An AFP journalist saw about 30 vehicles loaded with soldiers driving to neighbourhoods that have been hotbeds of violence and protests for months.

In a confused incident, on the outskirts of Conakry on Friday, five people were also killed when a train carrying fuel was attacked after the rail tracks were sabotaged.

At least three gendarme police, a soldier and a civilian were killed in the incident in Sonfonia district, said a government official, who spoke on condition of anonymity and give no further details.

The International Criminal Court's chief prosecutor also warned Friday that rival parties in Guinea could be prosecuted after fighting erupted.

"We are... continuing to closely monitor developments on the ground. The violence must stop," Fatou Bensouda said in a tweet.

"I wish to repeat this important reminder: anyone who commits, orders, incites, encourages and contributes in any other way to crimes... is liable to prosecution either by the Guinean courts or the ICC," she said.

Internet monitoring group NetBlocks said it suspected Guinea internet outages on Friday were an attempt by the government to restrict activity on social media to weaken the opposition.

AFP journalists reported that they had lost their internet connection on the Orange cell phone network, which is ubiquitous in Guinea.

"The incident appears to be consistent with previous restrictions attributed to state controls during elections in the country," NetBlocks executive director Alp Toker told AFP.

Diallo on Monday had declared victory in the election -- before the announcement of the official results.

In March, he pushed through a new constitution which he argued would modernise the country. It also allowed him to bypass a two-term limit for presidents, however.

Diallo, who was prime minister under authoritarian leader Lansana Conte, said security forces have barricaded him inside his house.

Police also raided his party headquarters in Conakry, the opposition leader said this week, tweeting agents were "destroying everything".

Security Minister Albert Damantang Camara confirmed that the party's premises had been "sealed off" under an open judicial order because "messages contrary to public order and national unity were broadcast".

He said Diallo's home was being guarded for "security reasons", without elaborating.

It’s beyond debate; Akufo-Addo has completely mismanaged Gha...
33 minutes ago

My morale is down – Angry Inspector reacts to mass promotion...
37 minutes ago