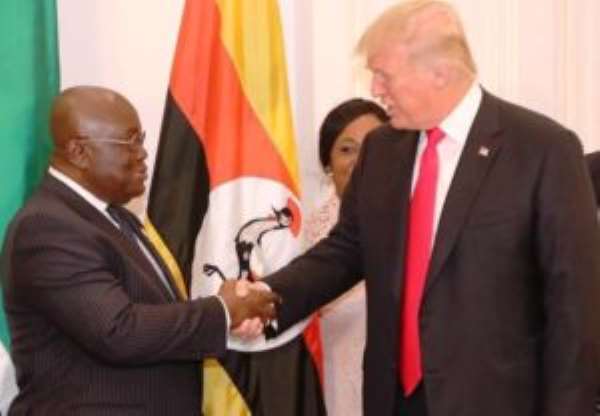 Americans will be voting on 3rd November 2020 to determine who runs their country for the next four years. We in Ghana will also be going to the polls on 7th December 2020 to also decide who will run our country for the next four years. However, there is a shocking and very interesting similarity between the political dynamics of Ghana, Nigeria and the United States of America.

The political similarity between the three countries began in 2008. Then senator Obama in 2008 campaigned for his presidential bid with a clear message of change. In Ghana, Professor Mills who was the NDC flagbearer in 2008 also campaigned vigorously with a clear message of bringing change to the socio-economic narrative of Ghana. As fate will have it, Obama won the election and was sworn into office on January 20 th, 2009. In Ghana, Professor Mills also won the election and got sworn into office on 7th January 2009. The most interesting thing about Professor Mills and Barack Obama's ascendency to the office of the President of their respective countries is their background. Professor Mills before he entered into Politics taught at the University of Ghana. He was a Professor of Law at the University of Ghana Law Faculty. Surprisingly President Barack Obama also read law at Harvard University and also taught constitutional law at the University Of Chicago Law School. During President Obama’s visit to Ghana in 2009, he commented on the law background both he and President Mills have.

In Nigeria Umaru Musa Yar’Adua a Nigerian politician got sworn into the office of the President of the Republic of Nigeria on 29th May 2007. He spent the latter part of his tenure seeking medical care abroad for undisclosed health challenges. In Ghana, President Mills also faced health challenges that made it imperative for him to seek medical care abroad. On 5th May 2010, President Yar’Adua of Nigeria succumbed to his illness and died at the seat of Government Aso Rock. On 6th May 2010, Goodluck Jonathan then Vice President under Yar’Adua took over as the President of the Federal Republic of Nigeria. President Obama commented on Yar’Adua’s death and said: “He was committed to creating lasting peace and prosperity within Nigeria’s own borders, and continuing that work will be an important part of honouring his legacy.” In Ghana President John Evans Atta Mills was also having serious health challenges. On 24th July 2012, President Mills of Ghana passed away at the 37 Military Hospital in Accra. On the same day, John Dramani Mahama then vice President under Mills took over as the President of Ghana. President Barrack Obama commented on the death of President Mills and said: “Mills is a strong advocate for human rights and for the fair treatment of all Ghanaians, tirelessly working to improve the lives of the Ghanaian people; He helped promote economic growth in Ghana in the midst of challenging global circumstances and strengthened Ghana’s strong tradition of democracy.”

Both President Goodluck Johnathan and President Mahama finished the tenure of the departed Presidents of their respective countries. Goodluck Johnathan then went ahead to run for the presidency after finishing the tenure of the late President Yar’Adua and won. He got sworn into office on 29th May 2011. In Ghana John Dramani Mahama also finished the tenure of late President Atta Mills, ran for the presidency and won. He got sworn into office on 7th January 2013. The tenure of President Goodluck Johnathan of Nigeria and President John Dramani Mahama was fraught with a lot of controversies particularly corruption. That made citizens of their countries advocate for change. In the United States, people were also fed up with the political establishment and were clamouring for change. After Obama finished his second term, people wanted to see something different. Three variables emerged to meet the needs of the people in the US, Ghana and Nigeria. The three variables are TRUMP, BUHARI AND NANA ADDO. These three politicians share similar attributes which are old age, experience and the desire to change the status quo of their respective countries.

Muhammadu Buhari ran against Goodluck Johnathan the then President of Nigeria and emerged the winner. Buhari got sworn into office on 29th May 2015. In Ghana, NANA ADDO also ran against the then President John Dramani Mahama and emerged the winner. NANA ADDO got sworn into office on 7th January 2017. In the United States of America, Donald Trump went against the former secretary of state who happens to also be the former first lady of the United States Hillary Clinton and Donald Trump emerged the winner. Donald Trump got sworn into office on 20th January 2017. Buhari ran for a second term and was retained as President of the Federal Republic of Nigeria. His second tenure began on 29th May 2019. President Nana Addo of Ghana and President Donald Trump of the United States of American are also seeking to be retained as Presidents of their respective countries. Ghana’s President Nana Addo has a formidable opponent who happens to be the immediate past President of Ghana John Dramani Mahama. In the US, President Trump is also facing a formidable opponent Joe Biden who happens to be the immediate past Vice President of the United State of America. Based on the historical political similarity that exists between Ghana, Nigeria and the United States of America, there is a high plausibility that Nana Addo and Donald Trump could end up consolidating their power. However, this analysis is not based on foolproof comparative assumptions due to the possibility that the political opponents of both Nana Addo and Donald Trump can capitalize on the creeping despondency amongst their citizens.