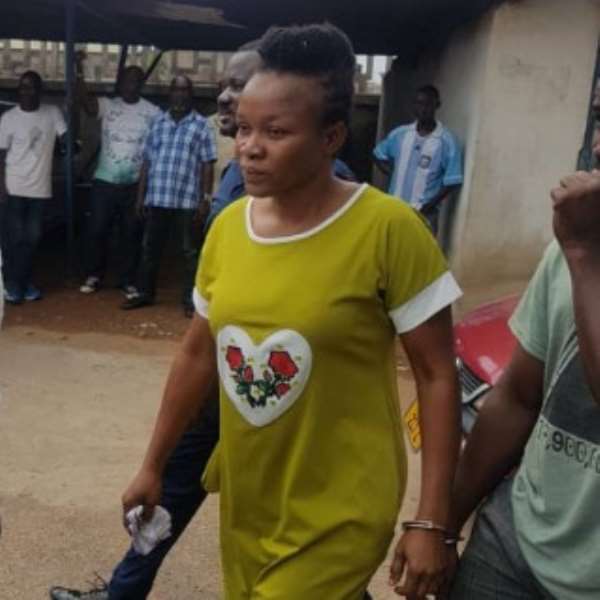 Esther is among a group of men suspected to be involved in an alleged coup attempt.

According to the Warrant Officer, who was making her case in court, since she was granted bail, she has been in the Military Police’s custody in a small room without a kitchen at Burma Camp barracks although she lives at the Teshie Barracks.

She explained to the Court that guards have been stationed at the hallway and standing orders have been issued for her at the Mess where she’s being detained.

She continued that due to the standing orders, interaction with her family is restricted and leaves her visitors with no privacy when they visit.

She also has to rely on food brought to her from home as she cannot cook where she’s being detained.

She stated: “I have a problem there. The standing orders restrict my family. I don’t have my privacy with my visitors. I don’t come out to see the daylight. I am always inside. They don’t allow me outside. I want to go to my house. I have three children. And my husband also lives in my house.”

Lawyer for the accused, Ziyerlei Agambilla, therefore, prayed the court to vary his client’s bail conditions to a normal bail noting that his client is still a nursing mother.

Mr Agambilla stated: “The present situation reflects the point that she’s still in custody. She’s a young mother who was breastfeeding her baby but because of the case, the breastfeeding was truncated.

“The youngest child is two years and the oldest is eight years old. For all intents and purposes, it looks like the applicant is still like someone in Nsawam prison”.

Lawyer for the accused further noted that due to the standing orders interaction with the accused is restricted to 45 minutes and in order to prepare its defence, the team needs unrestricted access to their client.

“Even we as lawyers we have only 45 minutes with her,” he stated.

The court presided by Justice Samuel Asiedu who is an appeal court judge sitting with additional duties as a High Court Judge granted the variation to bail.

The accused’s new bail condition is that she has been admitted to a bail of GHS 100,000 with two sureties and is expected to report to the Army Combat Training School Commanding Officer at 7.30 am every two days effective Saturday, 24 October 2020.

The court also granted the Prosecution’s motion to include additional exhibits.

The court has since adjourned the case to Friday, 20 November 2020.

Esther is standing trial for her alleged involvement in a coup plot to overthrow the Akufo-Addo-led government together with the Medical Director of the Citadel Hospital, Dr Fredrick Yao Mac-Palm.