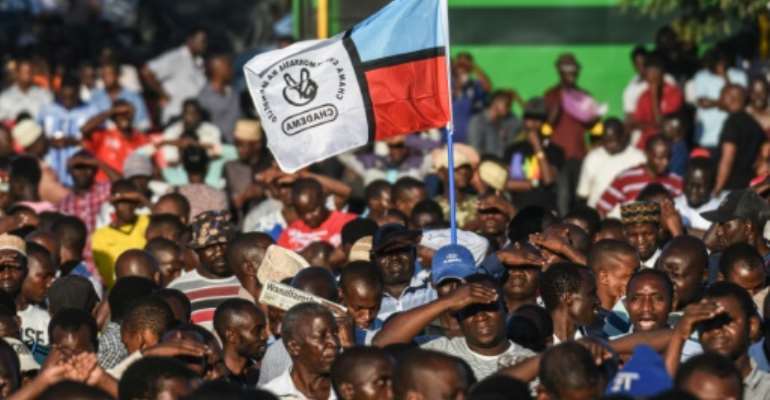 Supporters of Tanzania's Chadema main opposition party at the offical launch of its election campaign. By Ericky BONIPHACE (AFP/File)

The leader of Tanzania's main opposition party on Friday accused the electoral commission of tampering with voter lists ahead of Wednesday's general elections.

Tanzanians will elect a president, deputies and local councillors after five years of John Magufuli's regime, marked by a crackdown on political opponents in a country once viewed as a beacon of stability in East Africa.

"Legitimate voters" have been moved or disappeared from voter lists, he said, calling on the National Electoral Commission to provide an explanation.

An insufficient response "will electrify this country and render the election impossible (from the outset)," he added.

Zitto Kabwe, leader of ACT-Wazalendo, another opposition party, said voters had been added to his constituency in the western city of Kigoma.

"In my constituency, some 13,830 ghost voters have been added in the list. Some national service soldiers and students have been prepared to vote through these names," he claimed on Twitter.

During President Magufuli's five years in office, political rallies have been banned, freedom of speech suffocated and opposition leaders killed, abducted and arrested.

Tundu Lissu, the Chadema candidate who will challenge Magufuli at the polls, recently returned from three years in Belgium recovering from a 2017 assassination attempt in which he was shot 16 times.

Amnesty International said this month that opposition parties were facing harassment, arbitrary arrest and intimidation from authorities ahead of the vote, whereas the ruling party was allowed to campaign free and unhindered.