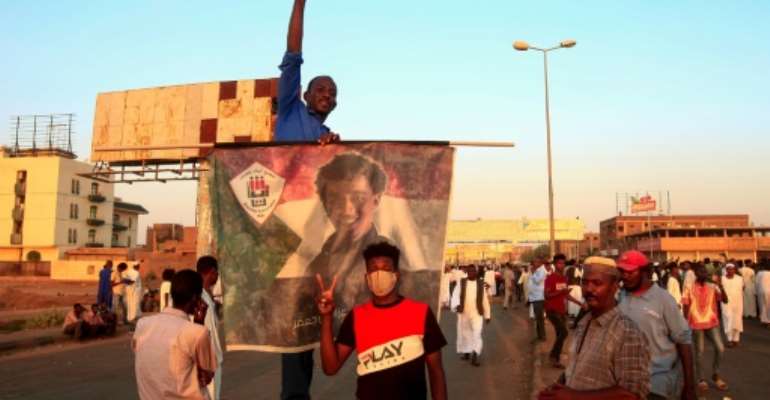 Sudanese protesters block access to the Mansheiya bridge over the Blue Nile in Khartoum during a demonstration demanding justice for a man killed in protests earlier this week over a deepening economic crisis. By Ebrahim HAMID (AFP)

Hundreds of protesters marched in Sudan Friday for a third day running, demanding justice for a man killed in earlier demonstrations over a deepening economic crisis, an AFP correspondent said.

Sudan has embarked on a rocky transition under a joint civilian-military administration since the ouster of president Omar al-Bashir in April 2019, but it has struggled with severe economic woes and skyrocketing consumer prices.

On Wednesday, a 20-year-old protester was shot dead by police and at least 14 others were injured, according to a committee of doctors linked to a protest movement that led to Bashir's downfall.

On Friday, the Sudanese Professionals Association, a trade union alliance that spearheaded the demonstrations against Bashir, called for the rallies to demand justice for the protester who was killed.

Protesters blocked access to a key bridge over the Blue Nile, and set up makeshift checkpoints across roads with rocks.

Mohammed Hassan, a protester manning a checkpoint, said they would only reopen the bridge if the person responsible for killing the demonstrator was arrested.

"If the government wants the bridge to be reopened... it must arrest him," Hassan said.

Ayman Nimr, the governor of Khartoum, called on Thursday for an investigation into the death.

In a statement released Friday, the victim's family announced their support for the protesters, and said the family would find "peace only with fair punishment".

A chronic shortage of hard currency in Sudan has led to long queues for staple foods and fuel, and power cuts last up to six hours a day.

Meanwhile, state news agency Suna said Sudan and the World Bank on Friday signed in Khartoum an agreement worth $370 million, specifying it was a grant.

Sudan's Finance Minister Heba Ali said $200 million came from the World Bank and the rest was from European countries.