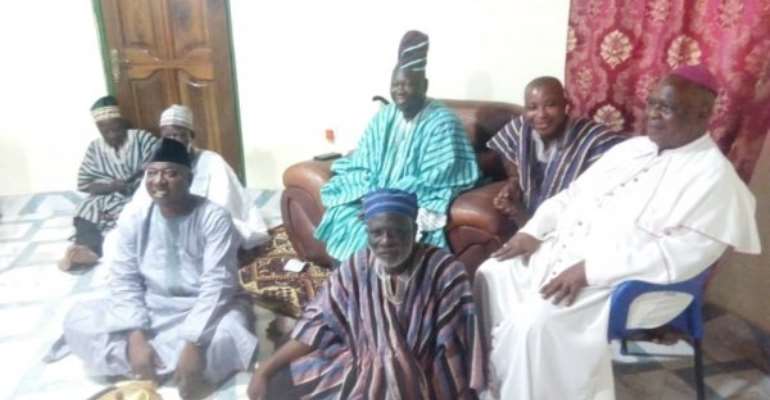 Yoo-Naa Andani Yakubu Abdulai has stated that the people of Dagbon need more development projects and not political violence.

“We need good roads, educational and health facilities, Agricultural inputs and not Political Violence that will retard our progress”.

Yoo-Naa Andani Yakubu Abdulai stated this when a team of Yendi Peace Centre led by Bishop Vincent Sowah Boi-Naa Bishop of Yendi, Catholic Bishop of Yendi Diocese called on him at Savelugu in the Northern Region.

He said it was important for politicians to use decent words during their political Campaigns nationwide to avoid conflict and urged them to ensure peace before, during, and after the December, 2020 elections.

He expressed happiness that the Bishop and the members of the Yendi Peace Centre were in Savelugu to visit him and reminded them to do more at various flash points by organizing workshops on peaceful elections.

He commended the Yendi Peace Centre for educating the people on peace and urged them to work harder to sustain the peace in the area.

Bishop Boi-Naa said they were happy to meet him after meeting Ya-Na Abukari II and the Northern Regional Minister Mr. Salifu Saeed on different dates about their work.

He said they were also in Chereponi, Saboba, Bimbilla amongst others in organizing workshops to educate them on the importance of peace.

He said they were also in his palace to seek his advice on elections and appealed to politicians to educate their supporters on peaceful election.

Mr. Peter Abugri Atia, Secretary of the Yendi Peace Centre appealed to Yoo-Naa to appeal to some of the Non-Government Organizations (NGOS), Government and others to support them financially to intensify their educational campaign on peace.

Mr Atia announced that since the Centre started its operation in 1994, they organized 186 seminars, workshops, meetings in Yendi Bimbilla among other towns on peace.