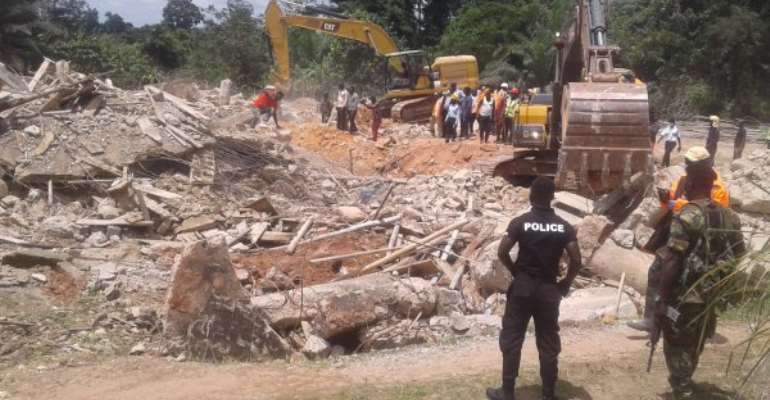 Report gathered from the Akim Oda Government Hospital indicated that six victims rescued from the collapsed church at Batabi, were treated and discharged on Thursday morning.

Mr Kwame Ampadu-Agyei, Administrator of the Akim Oda Government Hospital briefing the Ghana News Agency said, about 24 victims were sent to the hospital with 15 already dead, six treated and discharged, one referred to the St Joseph hospital in Koforidua while one died on Thursday leaving one, on admission.

Meanwhile, rescue efforts were ongoing to save dozens believed to be trapped under the debris, by the combined rescue teams including; the Ambulance Service, Military, Ghana National Fire Service, Police and the National Disaster Management Organisation (NADMO) when GNA visited the scene on Thursday.

Mr Amo Lartey, Director of Operations at NADMO, disclosed that the national Security was providing additional excavators to FastTrack the rescue operation.

Prophet Akoa Isaac, the founder of the collapsed Church of Prosperity, in an interview with GNA described as unfortunate the collapse and death of members of the church and added that the building had stalled for lack of funds.

He said church activities had slowed due to the coronavirus restrictions and disclosed that 52 congregants were at the Church for fasting and prayers, on that fateful day.