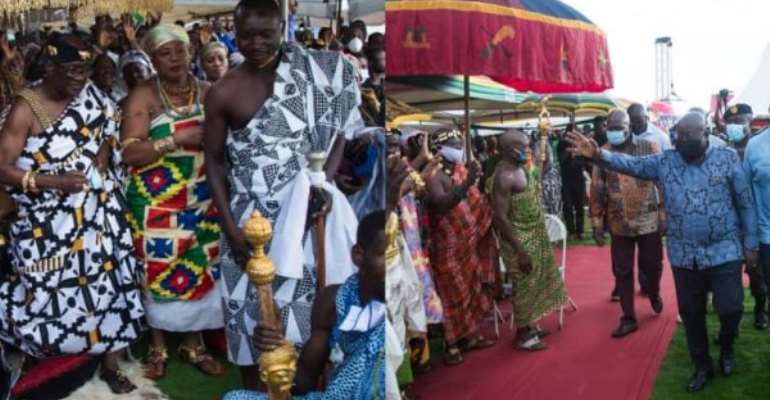 President Akufo-Addo said the development that lies ahead for the people of Oti Region will be rolled out massively.

President Akufo-Addo said this when he addressed a durbar of Chiefs and people of Dambai and cut-the-sod for the construction of the Oti Solid Waste Treatment facility at Dambai to climax his two-day tour of the region.

He noted that government's efforts to tackle the country's waste problems were to make sure that citizens were always in a good health to go about their various duties.

“The projects undertaken nationwide in relation to tackling waste issues were aimed at ensuring good health of the nation.”

He noted that the construction of the facility was a government of Ghana and Jospong Group partnership programme.

President Akufo-Addo said the government was ready and willing to support any citizen of the country, who aimed at helping the nation to develop through their efforts.

He said with all the developmental projects, the region had so far enjoyed, he was "assuring them that they won't be left out in any projects that would help the nation develop adding that “you will have whatever that is due you.”

The President urged the people of the region to vote for the New Patriotic Party (NPP) in the 2020 elections and all the eight Parliamentary Candidates (PCs) in the region.

“Just as you voted for me in 2016 because of my promises, you would all attest to the fact that I delivered on all my promises.

For this year's elections, I urge you all to vote boom, boom so that everyone will know I truly deliver.”

Mr Michael Yaw Gyato, Deputy Minister of Sanitation and Water Resources, said the government under the leadership of President Akufo-Addo had spanned development projects across the entire region and called on the electorate to endorse his candidature to continue and complete all the projects he initiated.

Dr Joseph Siaw Agyepong, Chief Executive Officer (CEO) of Zoomlion Limited, noted that the siting of the facility would bring development as well as offer employment to the youth of the region.

He said the facility would be ready in four months.

Nana Mprah Besemuna III, President of Oti Regional House of Chiefs and President of Krachi Traditional Council, noted that if not for the President, we would not have seen the creation of this region.

"Others may be created, but not ours. I urge all of us not to forget him and if there is any reward, we have to give him, let us do it wholeheartedly.”