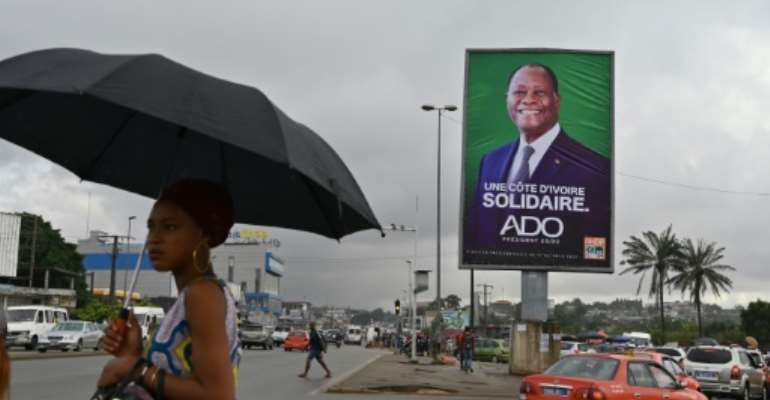 Ivory Coast's President Alassane Ouattara, seen here in a campaign poster, is running for a third term in defiance of a constitutional limit. By Issouf SANOGO (AFP/File)

At least 11 people died in intercommunal clashes in an Ivory Coast port town this week as tensions rise before an October election with President Alassane Ouattara seeking a contested third term.

The killings in and around Dabou, west of Abidjan, have fuelled worries Ivory Coast may again slide into the kind of post-election violence that left 3,000 dead in a 2010-2011 crisis.

Local officials had reported at least seven dead and 40 others injured this week, but on Friday said that toll had increased.

"We have found another body," local mayor Jean-Claude Yede Niangne told AFP. "That brings the total number of dead to 11."

"Things are calm this morning. Trucks are circulating again. Most of the shops have reopened," he added.

More than 50 people have been arrested, many with guns, machetes, axes, knives and other weapons in their possession, according to a statement from the gendarmerie.

Locals say tensions erupted on Monday with clashes between local Adjoukrou tribesmen, seen as close to the opposition, and Dioula people from northern Ivory Coast who back Ouattara.

A nighttime curfew has been ordered in the area until Sunday.

Around 30 people have died since August in clashes over the October 31 presidential election where Ouattara is seeking another term and several opposition candidates have been barred from running.

The regional Economic Community of West African States (ECOWAS) is urging opposition parties to reconsider their call to boycott the electoral process, and for their supporters to engage in civil disobedience.

The opposition has allowed doubts to linger over whether it will reject the vote, urging supporters to boycott the electoral process and campaigning, while stopping short of withdrawing three candidacies.

The calls for a boycott came after Ouattara, who has governed the world's top cocoa producer for two terms, said he would stand again in defiance of a constitutional limit.

He says that a 2016 reform has reset the counter of term limits allowing him to run again, a move the opposition rejects as illegal.