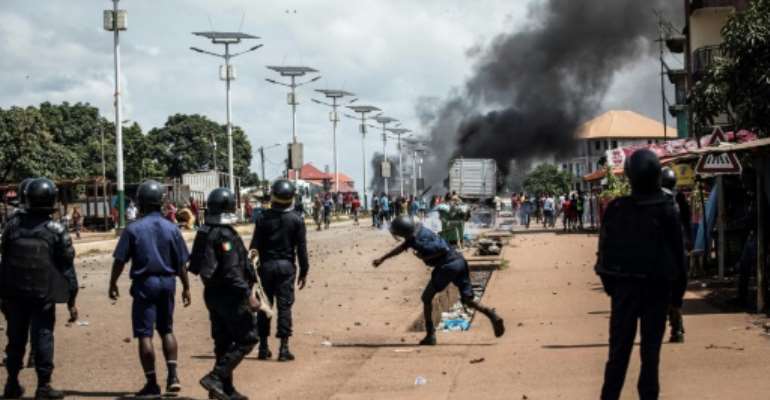 A police officer throws a stone at protesters during a mass protest on Wednesday. By JOHN WESSELS (AFP/File)

Figures released by the election commission late Thursday showed the 82-year-old incumbent, who is seeking a controversial third term, was the clear leader in Sunday's first round.

But opposition candidate Cellou Dalein Diallo has claimed victory and his camp has accused the government of "large-scale fraud" in counting ballots.

Internet monitoring group NetBlocks said it suspected the internet outage was an attempt by the government to restrict activity on social media to weaken the opposition.

"The incident appears to be consistent with previous restrictions attributed to state controls during elections in the country," NetBlocks executive director Alp Toker told AFP.

AFP journalists reported that they had lost their internet connection on the Orange cell phone network, which is ubiquitous in Guinea.

Months of unrest have seen mass protests against Conde's re-election bid violently put down, with dozens of people killed by security forces in the past year.

Since Monday, violence in cities across the country has left around 10 people dead, according to the authorities, a figure which the opposition says is much higher.

Family members reported five more deaths in the capital Conakry and in the provinces late Thursday, figures AFP was unable to confirm.

It did not declare a winner, but results showed Conde with more than 2.4 million votes, well ahead of Diallo with 1.2 million.

A run-off will be held on November 24 if needed.

Diallo, who was prime minister under authoritarian leader Lansana Conte, has said security forces have barricaded him inside his house.

Police also raided his party headquarters in Conakry, the opposition leader said this week, tweeting agents were "destroying everything".

Security Minister Albert Damantang Camara confirmed that the party's premises had been "sealed off" under an open judicial order because "messages contrary to public order and national unity were broadcast".

He said Diallo's home was being guarded for "security reasons", without elaborating.

Young people on Thursday erected barricades in the capital Conakry, knocked over trash cans, lit fires and hurled stones at police and gendarmes in riot gear, who responded with gunfire, according to witnesses.

In other parts of the country, clashes broke out in the towns of Pita, Labe and Mali.

Monitors had warned of internet disruptions in the poor but resource-rich West African nation of 13 million people.

Before the controversial March referendum in which Conde pushed through a new constitution -- allowing him to bypass a two-term limit for presidents -- the country's telecoms infrastructure firm Guilab announced repairs to its submarine internet cable.