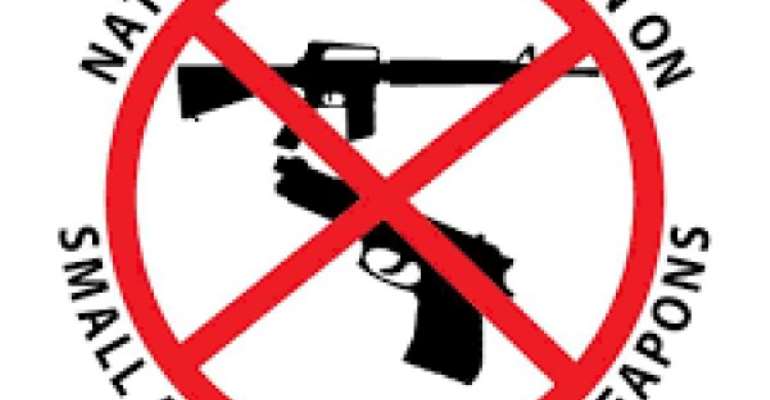 The National Commission on Small Arms and Light Weapons (NACSA) has called for increase security alertness in places identified as political 'hotspots' areas ahead of the December 7 elections.

The call followed a statement issued by the Ghana Police Service, which identified 4,098 hotspots areas in the country.

Speaking in Accra during the launch of an anti-electoral violence campaign dubbed: “Ballots without Bullets” in Accra, the Executive Secretary of the Commission, Mr Jones Borteye Applerh, said the proliferation of firearms in the country called for urgent action, especially in the Ashanti Region.

The Region, he said, topped the list of violent-prone areas with 635 flashpoints on the Police Service statement.

“I think we should do more, in as much as several security agencies are undertaking exercises in response to any violence because what we see in the media space gives us indications that people have weapons," he noted.

Mr. Applerh also advised the public to actively engage in reporting threats of violence, before, during, and after the elections to maintain peace and order in the country.

“What the declaration means is that, if these areas are not put under critical observation, something might happen. So the essence of this campaign is to teach Ghanaians not to be quiet, irrespective of their political affiliations.

“We are Ghanaians first before our political persuasions come in, but that shouldn't divide us because elections are just meant to selecting leaders,” he said.

Meanwhile, the Commission said there were about 2.3 million small arms in civilian hands, according to a survey conducted by the Kofi Annan International Peacekeeping Training Centre (KAIPTC) in 2014.

It said out of the figure, 1.1 million remained unregistered, with 1.2 million registered with the Criminal Investigation Department (CID) of the Ghana Police Service.

Mr Gyebi Asante, a Deputy Director of the Commission on Small Arms and Light Weapons, told the Ghana News Agency in an interview that the number of firearms in circulation could be more after six years of the baseline study.

Mr Asante said unregistered firearms in circulation posed danger to the country's peace and security, saying: "The fight against illicit small arms and gun violence is likely to elude us until we focus on ammunition control and management as a country.”

"Any arm or firearm, no matter how sophisticated, without cartridges or ammunition is silent and can be silenced forever."

Mr Asante said police records showed that even with the registered small arms, less than 100,000 licenses of the 1.2 million registered were renewed annually.

In view of that, he said, the CID had digitised the registration of civilian firearms and devising a system that would enable the police to track licensed gun owners who did not renew their licenses.

He said the digitisation would also facilitate the easy renewal of licenses online without gun owners necessarily trekking to the district police stations for renewal.

That, he said, would enable the police to keep a proper database of all licensed gun owners in the country and track missing registered firearms.

Mr Asante said though only GH¢10.00 was needed to renew a license for shotgun, most licensed gun owners failed to renew them and advised owners to consistently go for renewal since it saved them a lot of problems.

“The refusal to renew one's license could land one in jail, a consequence that is not worth anybody's negligence or forgetfulness,” he said.

Mr Asante said owning a firearm was a big responsibility while possessing an unregistered small arm was a huge risk that should not be taken for granted.

The Director-General for Special Duties at the Police Service, COP Christian Tetteh Yohuno, indicated that the Service's intention to achieve another gun violence-free general election was on course but called for support from all.

He, therefore, urged all weapon owners to register their arms and renew their licenses not to fall short of the law.

“There was no single gunshot during the period of elections in the previous elections and I assure that we are going to use all the strategies we used during the elections period and also add more strategies to make sure that there will be ballots without bullets.

"We have been organizing a series of intelligence operations and also making sure that persons in possession of illicit weapons will renew their licenses and failure to do so, renders their usage illegal," he stated.

COP Tetteh Yohuno stated that it was illegal for persons with registered weapons to take them to public places.

According to him, that made its usage illegal.

“So there will be education to ensure that people who have such weapons will register and also renew their licenses.

"It is also wrong for persons to also transfer or give the registered weapons to other persons to use. We will also enforce the law on how weapons have to be used and to make sure those who have legally registered their weapons do not take them to public places, "he added.

The Electoral Commission assured Ghanaians of its commitment to deliver a peaceful election.

It said it is collaborating with security agencies to avoid tensions on Election Day.

Anti-LGBTQI+bill not to engender hatred for persons, meant t...
26 minutes ago

JB’s two phones tendered in as evidence
26 minutes ago