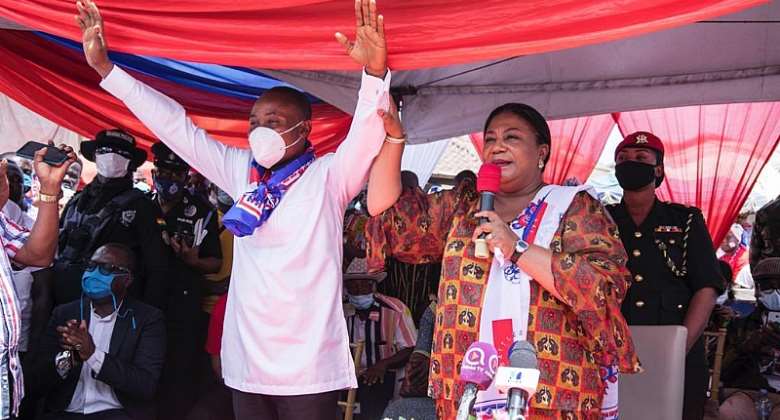 The First Lady, Mrs Rebecca Naa Okiakor Akufo-Addo, has asked the public to vote for the New Patriotic Party (NPP) led by President Akufo-Addo based on its development record.

Mrs Akufo-Addo made the call when she paid an official visit to the Ablekuma South Constituency as part of her campaign tour of the Greater Accra Region.

According to her, the good record that has been set by the NPP, should be the reason the NPP government is retained for another four years.

She noted that the flagship Free SHS, One District, One Factory, Planting for Food and Jobs and NABCO policies of the ruling government is impacting positively on the lives of Ghanaians.

“Right now, Free SHS has helped Ghanaians and a lot of people are benefiting, the government has also established more than factories all over Ghana which are creating jobs for citizens,” she added. “NABCO has also come to address the issue of youth unemployment.”

Addressing the gathering, she said President Akufo-Addo has started a process of moving the country to another level of development which must be supported by all.

"You have all seen how through the leadership of President Akufo-Addo, the country is changing and we need to support him and the NPP government so the change can be permanent," she urged.

With less than two months to the general elections, Mrs Akufo-Addo urged all to go out peacefully and vote on December 7 for the NPP and the Ablekuma South NPP parliamentary candidate, Bernard Brown.

She said, "We are a peaceful country and we have shown this by holding free, fair and peaceful elections over the years."

The First Lady also pledged to liaise with the appropriate authorities to address the concerns raised by fishermen and market women in the constituency.

"As soon as I get home, I will talk to the President about the outboard motor and personally see to it that the Tuesday Market is completed on time for you to continue trading," she assured.

Ablekuma South NPP parliamentary candidate, Bernard Brown, in a brief remark said the NPP is the best option for the continued development of Ghana and called on the constituents to retain the NPP for another four years, to secure the future of the country.

I'm grateful to be named by Forbes as African of the Year — ...
24 minutes ago

Covid-19: We oppose singling out African countries for trave...
24 minutes ago