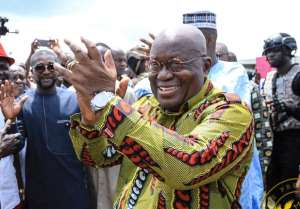 President Nana Akufo-Addo has called on the residents of Oti Region to vote massively for him come December 7.

This is the first time the Oti Region will exercise their franchise in the upcoming general polls after separation from the Volta region in 2018.

The president speaking at the wrap-up of his 2-day tour in Dambai on Thursday, October 22 advised the residents to cast their votes massively for him to continue the good works.

"In the few coming weeks, we will be voting to elect the next president and parliamentarians to lead us in order to develop the region.

...In 2016 I pleaded with you all to vote for me, and you did it, now we are about to vote again and I am calling on you once more," the president stressed.

Mr President noted that the developmental projects will continue when votes come in their large numbers on voting day.

"...Let the confidence and trust you had for me in 2016 be uplifted in this year's upcoming elections. I want you to vote 'boom boom' for me in the 2020 elections for everybody to know that you are happy with my work," emphasized.

President Akufo-Addo also called on the chiefs and traditional rulers in the region to support him win.

"I also want to count on you, the chiefs in the region to come out in your numbers and rally support for the party in the upcoming elections. You have been under the umbrella for far too long, I want to plead and urge you to climb the elephant in order to ensure total victory come December 7th," he emphasised.

I'm grateful to be named by Forbes as African of the Year — ...
7 minutes ago

Covid-19: We oppose singling out African countries for trave...
7 minutes ago