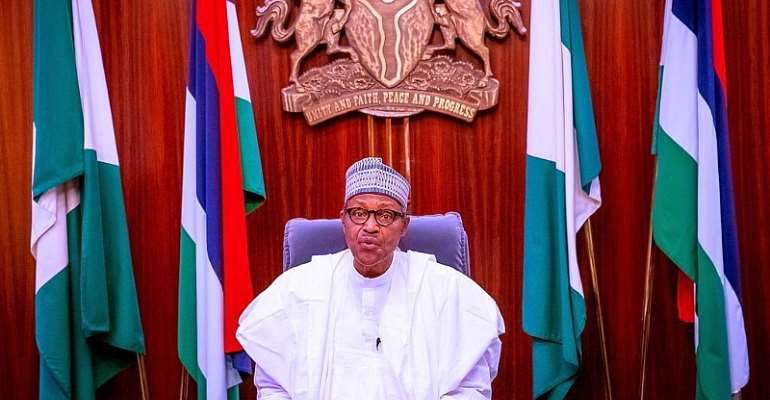 Nigeria's president, Muhammadu Buhari, has urged an end to unrest sweeping the country in the wake of the police shooting of unarmed demonstrators that sparked international condemnation and unleashed chaos in Lagos, Africa's biggest city.

Lagos has seen shootings, looted shops and a prison set ablaze since security forces earlier this week opened fire on peaceful protesters calling for better governance and an end to police brutality in the city of 20 million.

Rights group Amnesty International said Nigerian soldiers and police gunned down 12 demonstrators, while 56 have died overall across the country since a wave of protests began two weeks ago.

Speaking on national television, President Muhammadu Buhari warned protesters on Thursday not to "undermine national security" in his first national address since Tuesday's incident, which he avoided mentioning directly.

Instead, he blamed agitators who he said had "hijacked and misdirected" the protest movement.

"Under no circumstances will this be tolerated," Buhari added.

'Leave the streets, find a solution'

The 77-year-old called on the youth to "discontinue the street protests and constructively engage government in finding solutions".

US Secretary of State Mike Pompeo called for an immediate investigation into violence by security forces but Buhari has brushed off all foreign rebukes.

"We thank you and urge you all to seek to know all the facts available before taking a position or rushing to judgement and making hasty pronouncements," he said.

Sporadic gunfire was reported for the second day in Lagos on Thursday despite a round-the-clock curfew.

Buhari's uncompromising line stirred immediate anger online and looked unlikely to quell widespread ire in the face of one of the biggest crises of his tenure.

Protests erupted in Nigeria two weeks ago over police brutality by the loathed Special Anti-Robbery Squad.

Buhari scrapped the unit and pledged reforms but the demands from the young protesters broadened to calls for more sweeping change.

Authorities said the demonstrations were increasingly being taken over by criminals.

Your insatiable taste to travel in another luxurious jet to ...
37 minutes ago

Ghana’s 3.9% economic recovery is sluggish; Ghanaians must w...
39 minutes ago