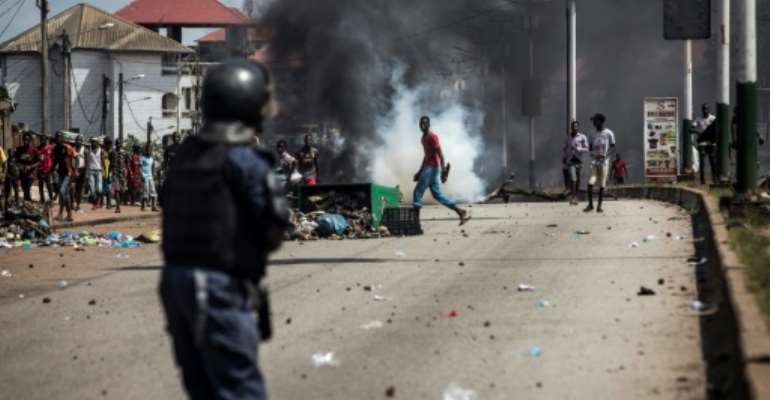 Cities across Guinea have been plagued by violence that has left around 10 people dead since Monday. By JOHN WESSELS (AFP)

Cities across the West African nation have been plagued by violence that has left around 10 people dead since Monday, according to authorities.

The violence follows a high-stakes presidential vote on Sunday in which Conde ran for a controversial third term.

Fresh results from the country's election commission released late on Thursday showed the 82-year-old the clear leader in the race.

But opposition candidate Cellou Dalein Diallo has claimed victory in the poll and his camp has accused the government of "large-scale fraud" in counting ballots.

Months of unrest have seen mass protests against Conde's re-election bid violently put down. Security forces have killed dozens of people in the past year.

Normally busy streets in the capital Conakry were deserted on Thursday, and explosions could be heard in the distance.

Young people erected barricades, knocked over trash cans, lit fires and hurled stones at police and gendarmes in riot gear, who responded with gunfire, according to witnesses.

"We have not slept all night because of the detonations, of the heavy fire. We feel like we are in a country at war," a resident of Sonfonia, Mamadou Moussa Bah, told AFP.

"Young children are traumatised while their elders are on the street, violently confronting the police," he said.

In other parts of the country, clashes broke out in the towns of Pita, Labe and Mali.

"Many of our parents went to the villages, they preferred to take refuge there," Marwana Soumanoh, a boilermaker in Pita, told AFP, accusing the police of abuses.

Abdoulaye Fily Diallo, the mayor of the northern town Mali, denounced the actions of soldiers "who go into town and shoot everywhere, frightening everyone", he said, accusing them of wounding several people.