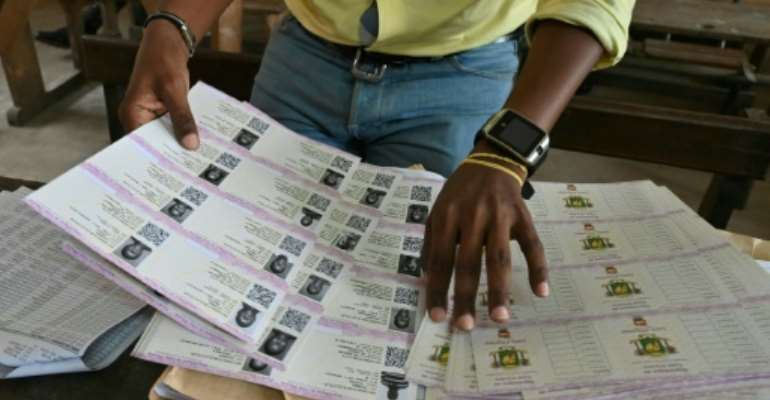 An Ivory Coast Electoral Commission official in Abidjan helps out with distribution of voting cards on October 14, 2020 ahead of the country's presidential election. By Issouf SANOGO (AFP/File)

The Ivory Coast opposition on Thursday rejected concessions offered by the government in a bid to end a boycott on the upcoming presidential election, as the UN voiced concern over an upsurge in intercommunal violence.

The West African nation has been hit by pre-election clashes that have left at least seven people dead and 40 others injured in recent days in Dabou, a town west of Abidjan, according to officials.

Around 20 people have died in such clashes since August.

The country's rulers on Wednesday opened the door to a possible reform of the electoral commission (CEI) which the opposition considers "subservient" to the regime of President Alassane Ouattara.

The violence in the lead-up to the presidential vote on October 31 has stirred raw memories of post-electoral clashes that killed some 3,000 people in 2010-11, when then-president Laurent Gbagbo refused to accept his defeat to challenger Ouattara.

United Nations Secretary-General Antonio Guterres voiced concerns over the latest tension, his office said in a statement, calling on all sides to "reject the use of hate speech and the incitement of violence along ethnopolitical lines."

"He encourages all political actors and their supporters to embrace meaningful dialogue and forge an environment conducive to the holding of an inclusive and peaceful election," the statement added.

The regional Economic Community of West African States (ECOWAS) on Monday urged opposition parties to "seriously reconsider their decision to boycott the election, and their call on their supporters to engage in civil disobedience".

The opposition has allowed doubts to swirl over whether it will shun the vote, urging supporters to boycott the electoral process and campaigning, while stopping short of withdrawing three candidacies

The calls for a boycott came after Ouattara, who has governed for two terms, said he would stand again in defiance of a constitutional limit, saying that a 2016 reform has reset the counter.

Dozens of would-be candidates have been barred from running in the election, including Gbagbo and ex-rebel chief Guillaume Soro, who both played key roles in the 2010-11 crisis.