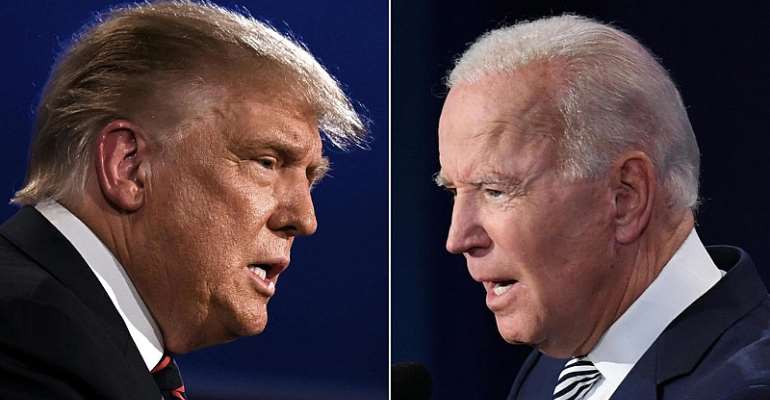 President Donald Trump and the man looking to replace him, Joe Biden, are set to square off in their final debate Thursday, less than two weeks before Election Day on 3 November. It is one of the last high-profile opportunities for the trailing incumbent to change the direction of an increasingly contentious campaign.

After a disastrous first debate and the cancellation of the second Trump-Biden faceoff, the stakes are high for the last significant media moment for the candidates before election day.

To avoid a repeat of the ugly confrontation that played out in Cleveland last month, the debate Commission will mute Trump and Biden during portions of Thursday's debate in Nashville, Tennessee.

As in the first debate, each candidate will be allotted two minutes of speaking time to initially answer the moderator's questions. But under a plan announced on Monday by the Commission on Presidential Debates, his opponent's microphone will be turned off during that period, to avoid interruptions.

The new rule drew scrutiny from the Trump campaign.

Feud over debate topics
Trump also took aim at the choice of topics selected by debate moderator Kristen Welker, whom he branded a "radical Democrat".

The 90-minute debate structure will be divided into 15-minute segments based on the following six topics:

The Republican president's campaign accused organisers of Thursday's showdown of helping the Democrat by leaving out foreign policy as a topic.

The Biden camp shot back that Trump was trying to avoid questions about his "disastrous Covid response".

Worried about losing the White House, some advisers are urging Trump to trade his aggressive demeanor from the first debate for a lower-key style that puts Biden more squarely in the spotlight. But it's unclear whether the president will listen.

Trump has been blitzing key battleground states with 12 days to go till Election Day on 3 November. His message has included telling Americans that the coronavirus outbreak is practically over and stepping up attacks on the business dealings of Biden's son, Hunter, while his father was vice president.

Obama stumps for Biden
Biden meanwhile has been laying low, letting his former White House partner Barack Obama campaign on his behalf in Philadelphia, Pennsylvania, one of a handful of battleground states expected to decide the election.

Obama on Wednesday urged Democrats not to be lulled into complacency by Biden's lead in the polls, reminding them of Hillary Clinton's shock defeat in 2016.

"We can't be complacent. I don't care about the polls," the former two-term president told supporters at a drive-in rally.

Obama blasted Trump for pushing conspiracy theories and argued that Biden's presidency 'won't be so exhausting'.

Trump plays catch-up
Thursday's debate is expected to be a 'make or break' moment for the Trump campaign.

A Quinnipiac University poll of likely voters released on Wednesday gave Biden a 51-43 lead in Pennsylvania, which Trump won by a narrow margin in 2016.

The president is trailing Biden in the national polls and another Quinnipiac poll spelled potential trouble for his reelection hopes.

His challenge on Thursday will be not just to persuade undecided voters but people who have already settled on Joe Biden at a time where many people think the country is in crisis.

It may however be too late. More than 40 million Americans have already cast their ballots, compared with just six million at this point before the last presidential election in 2016, according to the US Elections Project of the University of Florida.

Don’t give literal meaning to Akufo-Addo’s response to Torbg...
33 minutes ago