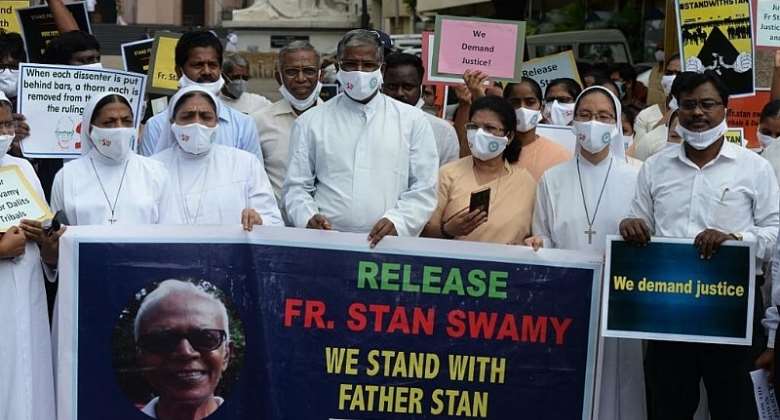 Demands to free an ailing Catholic priest have gathered pace in India after 83-year-old Fr Stanislaus Lourduswamy became the oldest person to be accused of terrorism.

Opposition politicians, rights groups, students and members of parliament joined Hemant Soren, chief minister of Lourduswamy's home-state Jharkhand in rallying against his 8 October arrest on charges of being a Maoist terrorist.

The Jesuit priest was jailed for 14 days by a court after federal police arrested him in the state capital Ranchi and spirited him away to Mumbai, 1,700 kilometres from his hometown.

The Mumbai court is likely to rule on his appeal for bail on Friday.

Lourduswamy, popularly known as Fr Stan Swamy, asserted he was arrested only because he challenged the incarceration of 3,000 indigenous inhabitants of Jharkhand, when it was administered by India's ruling Bharatiya Janata Party (BJP).

The BJP was voted out of power in the mineral-rich eastern Indian state last year.

“It is this which became a bone of contention with the state. They wanted me out of the way, and one easy way was to implicate me in some cases,” the priest said in a video message.

Lourduswamy is the seventh person accused of instigating clashes in a western Indian village in 2018. His longtime associate, Jean Dreze, said the police charges were nothing but a “morass of absurd accusations”.

“My question is: 'Why was this 83-year-old harmless man arrested?'” the Belgian-born Indian economist asked during a Wednesday night debate on Indian television.

“He's not trying to hide, he is not running away, he is cooperating with the investigating agencies. He is not in good health and he is thrown into a jail where he could easily die,” Dreze said.

“This is a clear case of human rights violations and a display of the BJP's authoritarian behaviour spreading across the country. We will oppose this,” state health minister Banna Gupta added.

Thousands of Catholic nuns and priests have marched in protest in several cities since Lourduswamy was put behind bars.

Ranchi Archbishop Felix Toppo was joined by priests, nuns and city residents as they formed a five-kilometre human chain in Lourduswamy's hometown October 16.

Prominent Indian scholars, lawyers and historians such as Ramchandra Guha have also spoken out in favour of his release from state custody.

Some commentators allege the Catholic priest was in the crosshairs of mining corporations.

“Stan Swamy and the Adivasis he supports in an impossible battle for their own ancestral lands are tiny pawns pitted against mammoth mining companies,” commented Mari Marcel Thekaekara, an Indian author.

“Falsely branding activists as Maoists is the easiest way to condemn them and to enable vested interests to finish them off,” she told online publication The Wire.