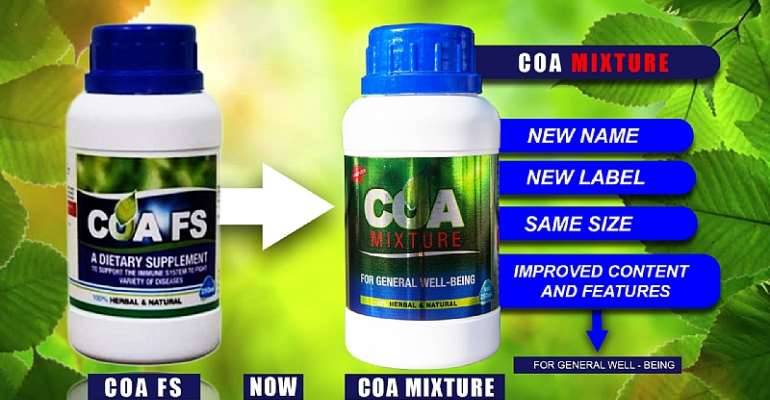 COA Mixture, the rebranded COA FS herbal medicine was officially unveiled at a colorful ceremony in Accra this week.

The ceremony, which was held at the Accra Metropolitan Assembly Headquarters in Accra, attracted several important dignitaries including a Deputy Minister of Health, Tina Mensah, senior plant researchers from the Centre for Plant Medicine Research (CPMR), renowned scientists and among others.

COA mixture unlike its previous name, COA FS is now an herbal medicine for general wellbeing of consumers and clients.

It will be recalled that barely 6 months ago, specifically March 31, 2020, the Food and Drug Authority (FDA) ordered COA FS Herbal Center to recall two batches of the products from the market after tests indicated that they were contaminated with microbial substances. The company's Marketing Authorization Certificate was subsequently suspended.

The company duly complied with the FDA directives, and ensured that all concerns raised by the regulatory body were addressed to the letter.

In addition to the new improved COA Mixture, the production center at Wusorkrom in the Abura-Asebu-Kwamankese District of the Central Region has also seen massive facelift and rehabilitation.

Delivering the Keynote address, Deputy Health Minister, Tina Mensah. Commended the producers of COA Mixture for adhering to the FDA directives leading to the restoration of its license.

She commended the CEO of COA Herbal Centre, Professor Samuel Ato Duncan, for showing respect for the rule of law by adhering to the orders and directives of the regulatory body.

According to her, herbal medicine has come to stay and urged all Ghanaians to embrace it, adding that the government was committed to promoting herbal medicine in the country and will therefore implement the necessary policy framework to empower local companies that are into plant Medicine. .

Prof Duncan heaped praises on the FDA for the swift manner it dealt with the challenges involving itself (FDA) and his company.

“We would like to commend the FDA for its immense support to our company. As a regulator, we acknowledge the pivotal role they play in ensuring the safety of consumers in the country. We want to assure them that we will continue to adhere strictly to their guidelines and policies to ensure safety of consumers,” he said.

“Once again, we want to assure the general public and all stakeholders that our company will always respect and abide by FDA's directive and will never indulge in anything that will mar our relationship or tarnish the hard won reputation of the FDA, he added

Touching on the rebranded product, Prof Duncan disclosed that the authorisation from the FDA changes the status of the COA FS preparation from a food supplement to a herbal drug.

Prof. Duncan said the centre had acquired a new authorisation for transforming it into a research and manufacturing company under the new name, the COA Research and Manufacturing Company Limited.

He said the new product is free from contamination and very safe for consumption, adding that, it has been duly registered.