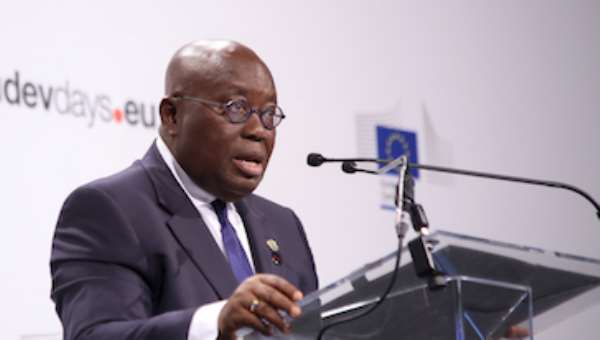 Ghana today is no longer the country some of us were born into. At almost sixty years (60yrs) of age now, I have never experienced and witnessed my beloved country Ghana to be so divided along partisan lines, a country that appears broken and everything seems to be falling apart. Not even under the many years of Military regimes and authoritarian rule in Ghana has the country been so divided and almost teetering to the brink of a calamity.

The country is sitting on a fast ticking time bomb and when it explodes the ramifications may affect tribal and ethnic relations, media relations, compromised religious leaders, the Judiciary, compromised Traditional leaders sowing seeds of partisan discrimination, have all contributed to rising social tensions and heighten levels of insecurity in the country which may be difficult to contain, as many will not be able to withstand the consequences.

Up until the year 2016, Ghana was generally recognised as a peaceful country and almost resembled a united family of diverse ethnic/tribal groups and diverse religious backgrounds living in harmony. Ghana had generally not experienced protracted periods of insecurity, civil unrest or tribal and ethnic tensions, even during the interludes that the country experienced Military dictatorship. Ghana continued to hold aloft a banner of peaceful coexistence, mutual respect, tolerance and respect for our cultural and religious diversity. Ghanaians had been living peacefully especially during the quarter century of our Fourth Republican Constitutional era.

However from 7th January 2017 when Nana Addo Danquah Akufo-Addo took over the reins of political leadership in the country key State and Public Institutions and Agencies that hitherto collaborated and worked for the common good of Ghana and Ghanaians suddenly became compromised and bastardized, and no longer acted to uphold the national public interests, and rather started pursuing and promoting parochial interests of NPP members and NPP party interests. Suddenly the ranks and upper echelons of the Security Services had been infiltrated by rabid vigilante surrogates of NPP whose loyalty was first and foremost to Nana Akufo-Addo and NPP. Ghana’s State and Public institutions had become hijacked and taken over by NPP apparatchiks and NPP loyalists, and Nana Akufo-Addo had succeeded in corrupting State and Public institutions with destructive NPP elements.

Ewes in Ghana have since 2017 been subjected to unwarranted harassment, insults and mockery of not being Ghanaians but rather Togolese, with such ethnocentric anti-Ewe sentiments being made by some prominent NPP politicians. In one instance the NPP Member of Parliament for Adansi-Asokwa Constituency in Ashanti region publicly declared that Ewes were not qualified to remain in Ghana. Other notable NPP politicians who made similar ethnocentric comments against Ewes include the NPP Regional Party Chairmen for Ashanti Region and Bono Region who both on different occasions remarked that Ewes were Togolese.

The anti-Ewe sentiments by NPP supporters was amply demonstrated during the recent Voter Registration exercise where numerous incidents were reported of NPP activists preventing people with Ewe names from registering in many constituencies across the country.

In the Media, Nana Akufo-Addo used the Communications Minister and the National Communications Authority to target and close down some Media houses generally deemed to be critical of NPP. Some key journalists have also been subjected to harassment and hounded by NPP activists. Such attacks and threats on journalists resulted in the murder of Ahmed Suale.

Prominent Religious leaders appear to have sold their consciences to Nana Akufo-Addo and NPP and are now hypnotized and have lost their senses and voices of reason. Should this trend continue Ghana may degenerate into the country of social deviants?

The Security Services were not spared and have also been compromised and infiltrated with NPP Vigilantes who appear to wield more power and authority than the regular professional Military and Police Service. The Ayawaso West Wuogon by-election showcased the threat to national security and the State sponsored insecurity waiting to be unleashed by rogue NPP elements embedded in National Security. With the fleeting chances of a second term for Nana Akufo-Addo one can only fathom the mayhem that maybe unleashed by these NPP infiltrators embedded in National Security.

Nana Akufo-Addo himself when in opposition is on record to have mentioned that Ghana will turn into the Arab Spring if Elections results are flawed. This dire declaration by Nana Akufo-Addo may happen should he fail to quickly concede electoral defeat in December’s elections.

With the Judiciary, the least said about them the better because Nana Akufo-Addo has really packed the Apex Court with his cronies and associates who have already demonstrated that they will not hesitate to defile their Judicial Oath and will not act as neutral arbiters of justice, but they may rather dispense justice unfairly and inequitably to favour Nana Akufo-Addo and NPP. These developments harken to the infamous battle war cry of Nana Akufo-Addo during the Atiwa by-elections when he declared “Atiwa ye be kyere bi bi kakra” (which literally translates to English as “At Atiwa we showed them – NDC- something small and a glimpse of the violence we are capable of unleashing”). Nothing happens in a vacuum so I believe Ghanaians are observing developments keenly.

For our revered Chieftaincy institution, Nana Akufo-Addo's strategy and agenda is simple. Divide and Rule! Nana Addo has desperately tried to project the Okyehene above the Asantehene and it remains to be seen whether Ashanti’s will vote massively for Nana Akufo-Addo to win 2020 elections so that he launches the final onslaught on the Ashanti Kingdom during his second term.

Nana Akufo- Addo is dangerous to our enviable democracy and MUST be jettisoned on December 7th before the worst happens in Ghana. To warn, is to for arm.

Akufo-Addo is confused over MMDCEs appointment – Ho Central ...
41 minutes ago