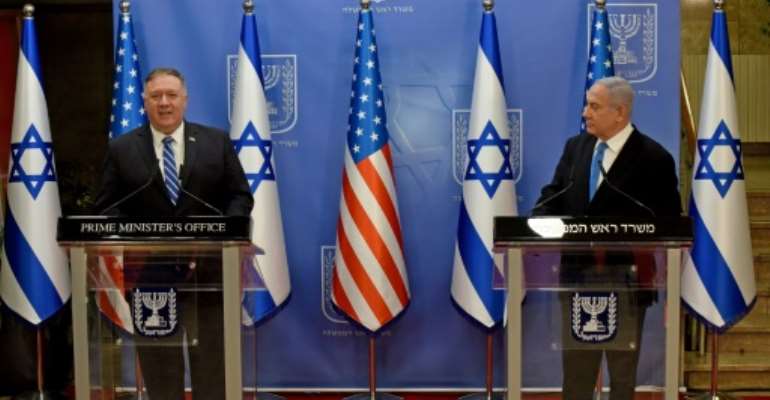 US Secretary of State Mike Pompeo has said he hopes Khartoum will soon normalise ties with Israel. By DEBBIE HILL (POOL/AFP)

The one-day return trip on Wednesday has heightened speculation Israel could soon strike a peace deal with the Arab-led African country with which it is technically at war.

US President Donald Trump, fighting for re-election on November 2, has pushed for further deals between Israel and majority Muslim states traditionally hostile to it.

A chartered plane left Tel Aviv for the Sudanese capital on Wednesday, according to the specialised air traffic website Flightradar24.

That call came after Trump had pledged Monday to take Sudan soon off the US state sponsors of terrorism blacklist, a legacy of the era of fallen dictator Omar al-Bashir.

Map of Middle East showing the countries that have established diplomatic relations or have had informal cooperation (economic, visits, etc.) with Israel.. By (AFP)

"According to reports that have been received in Jerusalem, the leadership in Khartoum has made a decision in principle to that effect," the newspaper said.

It reported that "an agreement has been reached between the president of the Sovereign Council, General Abdel Fattah al-Burhan, and Sudanese Prime Minister Abdalla Hamdok, who had been opposed up until now to normalising relations with Israel."

The newspaper mentioned a possible announcement by Trump "in the coming days" from Washington, with Israeli Prime Minister Benjamin Netanyahu and Burhan to join by video conference.

Netanyahu and Burhan in February held a landmark meeting in Uganda.

Sudan experienced a historic shift last year as Bashir was ousted in April in the face of youth-led street protests, and it is now turning the page on decades as an international pariah.

It has launched a series of reforms, put Bashir on trial and is cooperating with the International Criminal Court to try him over his regime's scorched-earth campaign in the Darfur region.

Sudan is one of four nations branded by Washington as a state sponsor of terrorism, along with Iran, North Korea and Syria, severely impeding access to loans, debt relief and foreign investment.

Sudan was designated in 1993 during the rule of Bashir, who had welcomed Al-Qaeda founder Osama bin Laden as he imposed a brand of political Islamism on the country.

Trump said he was ready to remove Sudan from the blacklist after Khartoum agreed to a $335 million compensation package for victims and relatives of past attacks.

Pompeo had discussed the issue of normalising ties with Israel in August on the first visit in 15 years by a top US diplomat to Khartoum.

But Hamdok at the time demurred on the controversial step, saying the transitional government did not have authority to normalise with Israel.