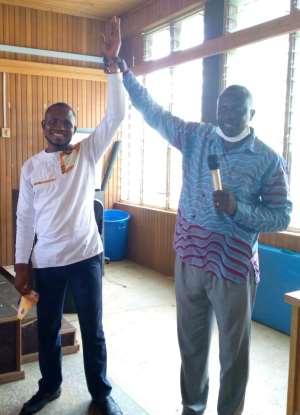 In his address after been sworn - in by the Presider of Kenyasi Magistrate Court, the Presiding Member expressed gratitude to his colleagues for assigning him to the position and urged them to work as a team towards the development of the District.

According to him, with immediate effect the assembly will be forming the various committees per the concept of Local Government Act to fast track its activities especially the approval of 2021 budget. " I'll ensure we speed up things because the inability to elect PM on time has limited us " he mentioned.

On what he will bring on board to curb indiscipline and partisan politics among members which led to the delaying of electing the PC, John Kwasi Anane hinted that the two are his major priorities as far as his leadership comes to play.

He expressed that the member of the house must exhibit absolute discipline in and out of the house so measures would be put in place for that effect. He further said with members practicing partisan politics is highly unacceptable at their level therefore he will ensure to end it to work as one body to benefit residents.

The District Chief Executive (DCE), Anthony Mensah thanked and urged members to work with common goal which is to bring development to the doorsteps of the people. He said the assembly which is taunted as one the best in the region must be kept as such so therefore assembly members need to be reminded.

The Member of Parliament (MP), Joseph Dahah congratulated the newly elected Presiding Member and advised him to be firm on decisions to bring developmental change to the district because there are many challenges to him position.

Nana Antwi Eric, Nana Adu Bonsu, Stephen Baah, David Tawiah and Nnuro Ameyaw contested for the position but the non was able to secure the required number of votes.