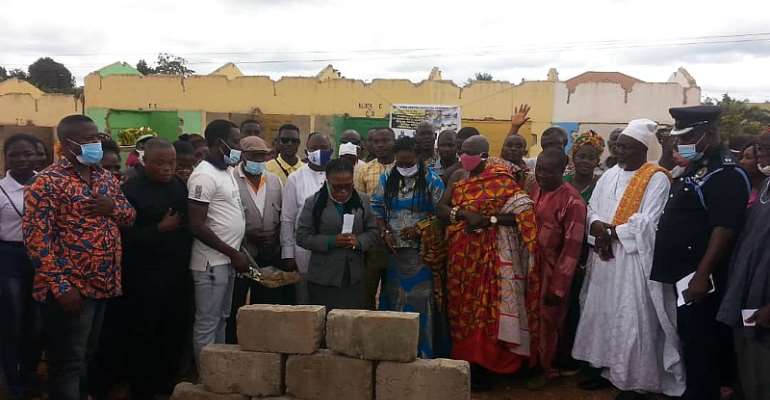 The Birim Central Municipality has benefited from the World Bank’s secondary cities project. The project which is under the Ghana Secondary Cities Support programme (GSCSP) was initiated by the Ministry of Local Government and Rural Development.

Out of 260 District Assemblies in Ghana, 25 of them including Birim Central qualified for the said projects.

This was announced by Municipal Chief Executive for Birim Central, Mrs. Victoria Adu at a groundbreaking ceremony to commence work on the Nkwantanum Market project.

Mrs. Victoria Adu commended the President of the Republic for initiating such an important project in the Municipality to help improve the living standard of the people.

According to her, the project when completed would contain102 lockable market shops, conference rooms, restaurants, refuse container base, nursery school, washroom, sickbay, and among others.

Mrs. Adu indicated that a similar project which is phase 2 of the Ghana Secondary Cities Support Programme (GSCSP) would also kick start at Oda Kumasi Station. This she said would go a long way to boost businesses in the Municipality thereby reducing congestion at the Oda central market.

She used the occasion to advise the taxpayers to honor their tax obligations to enable Assembly gets revenue to execute more infrastructural projects in order to address the basic infrastructural deficits confronting the Municipality.

Recounting achievements of government under the leadership of Nana Addo Dankwa Akuffo-Addo, Mrs. Adu said a number of developmental projects and intervention programmes have been executed in the various sectors of Ghana’s economy to reduce poverty bedeviled on citizens.

The planning officer of the Assembly, Mr Aziz Awudu said documentations on Nkwantanum Market Project have been completed by the Tender Committee of the Assembly in collaboration with the Eastern Regional Coordinating Council (ERCC) and Ministry of Local Government and Rural Development and however hinted that inspections have also been carried out on the said project site by the relevant stakeholders.

Mr Aziz further made appeal to residents who have placed their properties on the project site to endeavour remove them to enable the contractors kick start of the projects.

However, he indicated that the Birim Central Municipal Assembly qualified for the said project based on a number of factors among the District Assessment Performance Tool (DPAT).

Obrempong Gyamfi Saforo Kyere II, who chaired the programme thanked Nana Addo Dankwa Akuffo-Addo and his government for their kind gesture. He made a passionate appeal to the contractors to do quality work to ensure the long lifespan of the project.