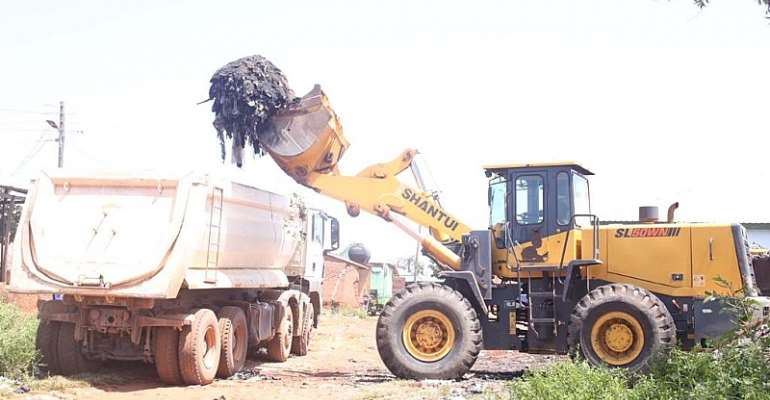 Overaged illegal dumpsites in the Northeast region have been evacuated by the ministry of Sanitation and water resources as part of the government's initiative of making the country the cleanest City in Africa.

The exercise which started simultaneously across the 16 regions is expected to be done within a week.

MMDCES and the regional coordinating Councils have collaborated to work effectively to ensure these illegal dumpsites are eradicated permanently as the government embarks on this laudable initiative.

He said, evacuating of the illegal dumping sites in the Municipality will help curb sanitation problems.

He added that after the evacuation of the dumping sites, they are looking at compressive measures so that after 6 months, the residents will not be dumped there again.

"We were overwhelmed when we got the news that Zoomlion Ghana Limited was coming to evacuate the illegal dumpsites. Let me commend the Executive Chairman of Jospong Group and his affable staff for their selfless efforts".

He also indicated that he will discuss with the regional manager for Zoomlion in the region to educate the residents on how to avoid dumping refuse illegally".

Mr. Inusah Mohammed a resident of Taran fugu in an interview stated that evacuating the refuse from the taran fugu township will help those who live around the site.

"We say thank you to the government for coming into our aid to rescue us from illness and at the time I will appeal to the government and Zoomlion to provide us with enough containers so that the refuse will not be thrown like it used to be".

It will help us a lot because mosquitoes will be a thing of the past to those of us living here. There were alot of house flies in our homes". Mr. Inusah added

Speaking to the North East regional Minister Hon. Solomon Boah, he showed gratitude to the carrying out the exercise.

"This emergency evacuation exercise that you are doing couldn't have come at any other time than now. I can tell you that the first two places that you are going to embark on is been a thorny issue for some of us but we have been doing a lot of planning on how to sanitize the place. So today's exercise that has just started is something that we have really worked hard to make sure it comes to pass".

"I want to use this opportunity to thank His Excellency Nana Addo Dankwa Akufo-Addo for giving nod to the concerns that came from the Ministry of Sanitation and Water Resources for this exercise to be done because we know it has a lot of cost implications so if you have a President that is so willing and committed to the using all the available resources in this country to evacuate refuse heaps to make the place nice to live and feel healthy, it is our prayers that the good lord will Sustain his life so that he can continue the good work for the nation".

"I know the Ministry cannot just say that they have all the resources but we will continue to appeal to them that we will be drawing their attention to other places that need such attention".

He also added that the exercise which has just started in the region will be extended to other places in the region.

We will turn the affected places into a Multi-Purpose recreational centre, he added

This is a National exercise that every regional Minister and the entire jubilee house are excited about it.

The Ministry of Sanitation and water resources under the leadership of Hon. Cecelia Abena Dapaah is optimistic that the entire country will be the cleanest city on the entire African continent.

Akufo-Addo is confused over MMDCEs appointment – Ho Central ...
40 minutes ago