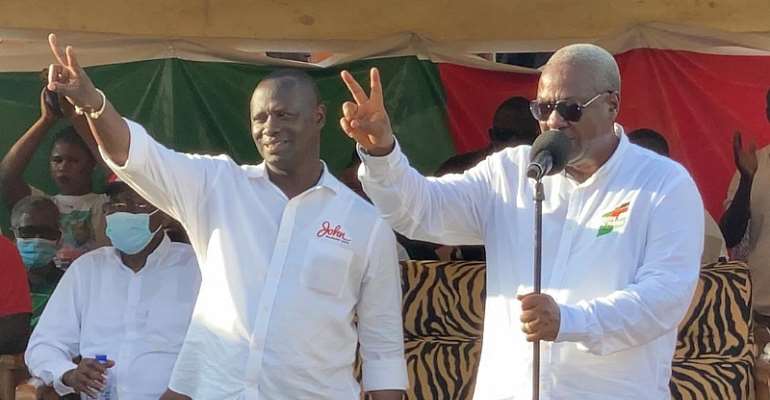 Former President John Dramani Mahama has assured the chiefs and people of Nkroful that the construction of the Atuabo Freeport would commence immediately he wins power to support the oil and gas industry and also help create jobs for the youth.

Former President Mahama gave the assurance in a response to a request by the chief of Nkroful during a campaign durbar at Nkroful in the Ellembelle constituency.

“We created many industries and worked on several social infrastructure in the Ellembelle constituency. This is because we knew the oil was discovered here and the people have to benefit from it. So I asked that some of the oil revenue is used to fix key roads in this area. There are other projects like the Atuabo Freeport which was also earmarked for construction after agreement with Lonrho to support the oil and gas industry.”

“Unfortunately our brothers from the NPP sent the Lonrho Atuabo Freeport agreement to court in opposition to the project and dragged it for the project to delay till we also left government. We would have created several jobs for our youth here if the Freeport project was allowed to take place. However I have the belief that the project will come on as long as we win power,” he added

The Chief of Nkroful, Nana Kwesi Kutuah while welcoming the NDC flagbearer's campaign to Nkroful appealed to John Mahama to make the abandoned Atuabo Freeport a reality.

Ghana could default on debt payment if government fails to s...
11 minutes ago