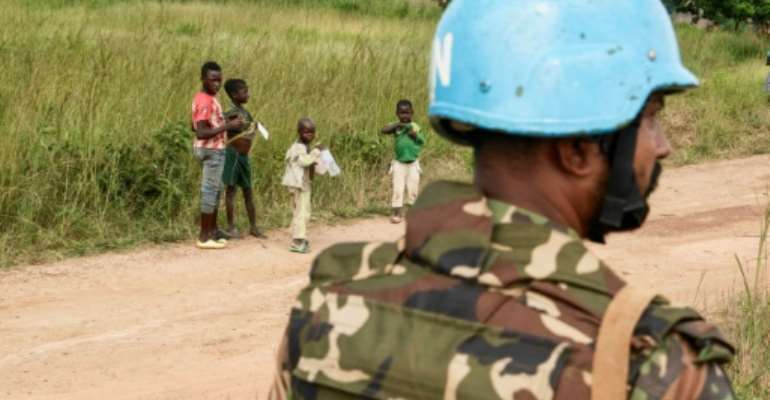 A UN soldier, part of MINUSCA mission in CAR where militia fighters are upsetting attempts to register voters for the presidential election in December. By Camille Laffont (AFP)

France on Wednesday rejected "completely unfounded" accusations by The Sentry, an NGO co-founded by Hollywood star George Clooney, that French networks are working to influence elections in the war-torn Central African Republic.

"The accusations against France in this report are completely unfounded," the Foreign Ministry said.

Presidential and parliamentary elections in the country -- one of the world's most violent, where militia groups control two-thirds of the landlocked nation -- are set for December 27.

This week The Sentry alleged that "French and Russian networks" are working to influence those elections, waging "a proxy war" by exploiting armed groups.

It added that France was fulfilling that role "in full transparency and in coordination with other international partners".

France, alongside its EU partners and the United Nations, has offered its support to the organisation of transparent elections, economic and social development and the "restoration of state authority throughout the country," the ministry said.

The Central African Republic is diamond- and gold-rich but crippled by poverty, conflict and sectarian violence.

President Faustin-Archange Touadera is running for a second term in December against his main rival Francois Bozize, a former president who was toppled in 2013.

Russia has been engaged in a vast diplomatic and financial offensive in the former French colony since 2018 in return for major concessions to Russian companies for the exploitation of minerals, particularly gold and diamonds.

"French and Russian networks are working in the shadow of Central African and regional actors to influence the electoral process and advance their respective economic and geostrategic interests in CAR and Central Africa as a whole," The Sentry said in its report published Monday.

This enables war "profiteers to make a fortune out of misery," the group added.

The NGO, co-founded in 2015 by Hollywood star George Clooney and former US official John Prendergast, specialises in investigating war crimes and corruption in Africa.

The Sentry, in its accusations against Russia, pointed the finger at the Wagner Group, a private paramilitary Russian company linked to businessman Yevgeny Prigozhin who has close ties to President Vladimir Putin.

Kremlin spokesman Dmitry Peskov said he would not comment on the NGO report, "because it is unlikely that this organisation (The Sentry) can be considered as one of those with real expertise."