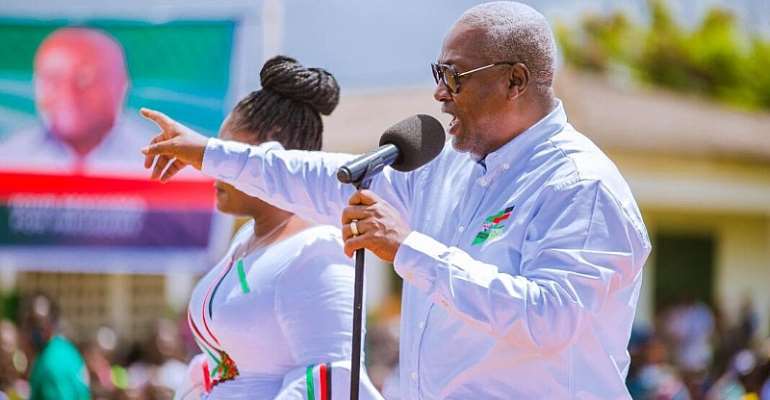 Former President John Dramani Mahama has promised that his next government will focus on initiatives that will create and provide jobs, and also introduce free Technical and Vocational Training.

According to the former President, the NDC will continue to provide the needed infrastructural and development projects that it is noted for, but his main focus will be on skills training and providing jobs.

Speaking at Bonyere in the Jomoro Constituency of the Western Region, Mr Mahama said the NDC’s one million jobs plan and free TVET and National Apprenticeship Programme are important because the failure to create jobs for the teeming youth could prove disastrous for the nation.

The NDC Presidential Candidate who was interacting with cocoa farmers and fishermen disclosed that his government will rebrand and introduce free Technical and Vocational Education Training (TVET) from the basic to the tertiary level, which would imbibe in graduates the needed skills and also carve a definite career path for them.

Mr Mahama revealed that his interest in the area of TVET gained firm roots from a personal encounter he had when he went to inspect an oil and gas project and was informed by the supervisor that they often bring in professional welders from other countries because Ghana did not have enough trained personnel to deliver the job specifications.

For the out of school youth, Mr Mahama said under his free National Apprenticeship Programme, government would engage and pay master craftsmen in the communities to equip and train the youth in various traditional vocations.

He added that upon completion of their training, government would give them the needed tools and equipment so that they can earn a living for themselves.

The NDC leader also divulged that his government will establish a petrochemical industry in Bonyere, which he says will be phase two of the oil and gas development the NDC started in the region, adding that it will bring more jobs to the people of area.

He therefore urged the Bonyere Community to vote for the NDC so that it can implement the promises contained in the People’s Manifesto.