#EndSARS: What it feels like to be in the shoes of a young Nigerian 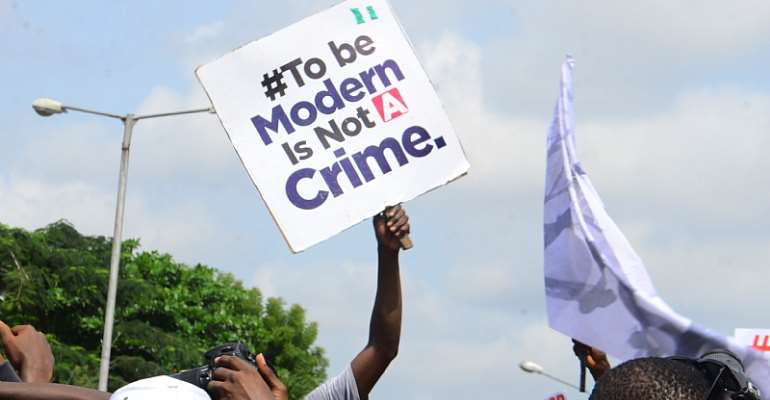 Nigerian youths are often stereotyped and harassed by the police for being in possession of a laptop or iPhone. - Source: Photo by Olukayode Jaiyeola/NurPhoto via Getty Images

Following weeks of nationwide protests against police brutality, led by young Nigerians who complain of being targeted by the police, Adejuwon Soyinka asked Oludayo Tade, a sociologist, to help us understand what it feels like being a young Nigerian living in the country today.

Why have the protests been driven by young Nigerians?

The immediate trigger of the protest has to do with the brutalisation of young Nigerians by the trigger happy and extortionist Special Anti-Robbery Squad, now disbanded. Members of the unit extorted and abused the privacy of the young people through negative profiling. Most of those killed by the police tactical team are young and have not committed any crime .

Efforts by families and friends of these victims to get justice have mostly hit brick walls. While the 'uniformed offenders' walk free, the victims are left to mourn their losses.

Young Nigerians have been at the receiving end of bad governance since the return of democracy in 1999. Their education is poorly funded, with poorly equipped laboratories, uninhabitable hostels and unmotivated lecturers. About 14 million young Nigerians are out of school, partly because of insecurity and education affordability. About two million young Nigerians write the university matriculation examination every year. But only about 500,000 get admitted to university. Over 90% apply to public funded institutions, most of which suffer from infrastructural decay.

In addition, young Nigerians are the worst affected by unemployment. There are 21.7 million unemployed Nigerians with the youth accounting for 13.9 million of this number.

There is increasing hopelessness and dashed hopes. Young Nigerians watch a system where the ruling class takes all.

What does it feel like being a young Nigerian living in Nigeria today?

Young Nigerians are called the iPhone or Twitter generation. President Muhammadu Buhari has described them as being lazy cohorts who are looking for free things. Apart from this presidential framing, any successful young person is falsely labelled as involved in internet fraud. This is what the disbanded police unit feasted on, pouncing on anyone on the road carrying laptops, having iPhones or driving posh cars. They do this not to prevent crime but to harass and threaten; to frame them with robbery or threaten them with death. Cases abound of such behaviour.

Thus, it seems to be an offence to dress well, look nice and have items such as a laptop.

More broadly, young Nigerians live largely on the margins of the society.

Why is this particular protest different?

It coincides with people reaching boiling point on many issues which the Nigerian state has failed to address. The economy has been on lockdown due to COVID-19. But intimidation and killing by the police hasn't stopped during the pandemic.

This protest is coordinated online combined with people gathering physically. It is superbly organised.

A number of groups have been part of the demonstrations. There are students who have been at home due to a seven month strike by the Academic Staff Union of Universities to force government to fund public universities properly. Then there are unemployed youth who have graduated from the universities but either have never had a job or have lost their job during the pandemic. Lastly, there are the victims of police brutality, their families and relations who have also mobilised.

This protest is largely organised by young Nigerians who have never experienced military rule. Is this material?

Democracy returned to Nigeria in 1999 – more than 20 years ago – but things have not improved. This generation is the internet generation. They hear of stories of Nigeria's glorious past from their parents and in literature but are served with a bitter present. They also know what happens and what citizens of other countries enjoy. They do not need to have encountered military experience to speak up against a system that is not working or meeting their needs and aspirations.

What would you consider as important takeaways from this protest?

The first is that the way in which the protest was organised suggests there is a future for the country. The protesters showed empathy and created job opportunities. They showed the importance of taking care of people by providing food and drinks for protesters. They treated the injured and provided support for the vulnerable.

They also crowdsourced for funding and they accounted for the money without needing to set up a committee as their government would do.

And they showed that religion, party politics and ethnicity are divisive tools used by the ruling class to keep people divided while they exploit them.

Secondly, they used their protest to show their love for Nigeria. They show why people need to speak up against the tyranny of the ruling class.

Thirdly, the protest has woken up many from their slumber to act on the need to reform the Nigerian police.

Lastly, a new wave of rights-demanding citizenship is rising in Nigeria. If sustained it could reset the country and make the government responsible, responsive and accountable.

Oludayo Tade does not work for, consult, own shares in or receive funding from any company or organisation that would benefit from this article, and has disclosed no relevant affiliations beyond their academic appointment.