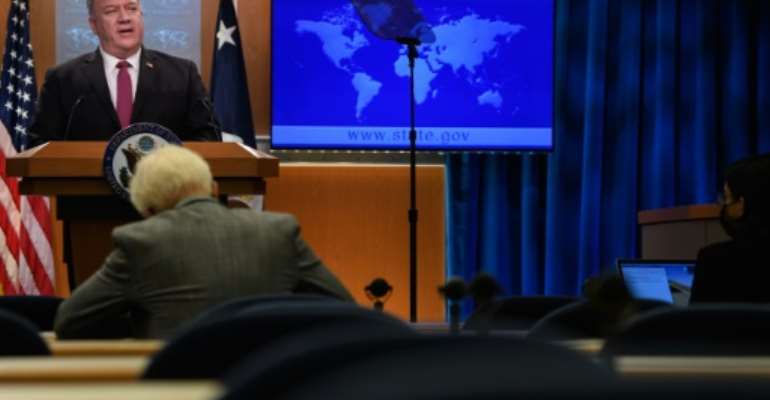 US Secretary of State Mike Pompeo voices hope at a news conference that Sudan will recognize Israel. By NICHOLAS KAMM (POOL/AFP)

US Secretary of State Mike Pompeo said Wednesday he hoped Sudan will soon recognize Israel as Washington moved to remove the Arab country as a state sponsor of terrorism.

Pompeo said that the United States wanted every nation "to recognize Israel, the rightful Jewish homeland, to acknowledge their fundamental right to exist as a country."

"We are working diligently with them to make the case for why that's in the Sudanese government's best interest to make that sovereign decision," Pompeo told reporters.

Trump announced Monday that the United States would remove Sudan from its list of state sponsors of terrorism, a major goal of the year-old civilian-backed government.

Seeing leverage, the Trump administration had asked Sudan to look at normalizing relations with Israel, a close US ally and signature cause for Trump's evangelical Christian base ahead of November 3 elections.

The United Arab Emirates and Bahrain last month announced an agreement at the White House to recognize Israel, a coup for Prime Minister Benjamin Netanyahu.

Sudan was designated a state sponsor of terrorism in 1993 after then dictator Omar al-Bashir welcomed Al-Qaeda founder Osama bin Laden.

To exit the blacklist, which has severely impeded investment, the cash-strapped nation agreed to pay $335 million to survivors and victims' families from Al-Qaeda twin bombings in 1998 of the US embassies in Kenya and Tanzania.

Pompeo said that the United States had "begun the process" of the delisting. Congress then has 45 days in which it can raise objections.

"We think that there will be enormous bipartisan consensus that that's the right thing to do," Pompeo said.