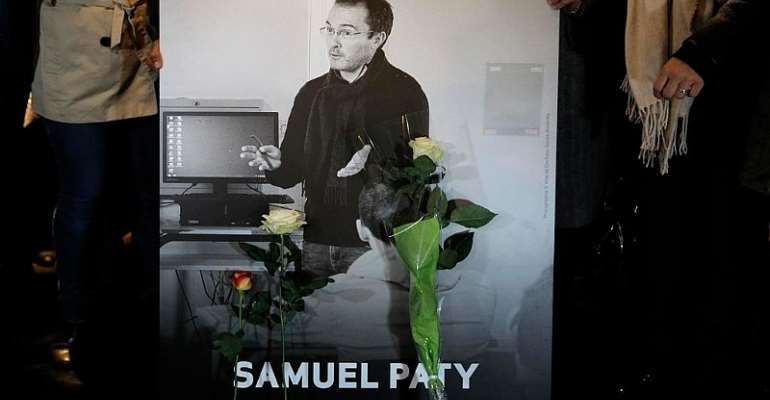 French President Emmanuel Macron is to lead tributes to Samuel Paty in a ceremony at Sorbonne University on Wednesday evening. The teacher, beheaded by an Islamist terrorist last week, will be awarded the nation's highest decoration, the Légion d'honneur.

>> Watch the national tribute to Samuel Paty LIVE at 1930 GMT

Among the 400 people attending the service will be former French presidents, the French government and key establishment figures. One hundred school pupils have also been asked to attend.

The ceremony, to start at 7:30 pm Paris time, is to be held in the presence of Paty's family, in the courtyard of the Sorbonne, France's oldest university and a symbol of the Enlightenment.

Paty will be awarded the Légion d'honneur, the highest decoration bestowed by the French state, in recognition of the fact that he died for trying to explain the importance of freedom of speech.

A letter written in 1957 by Albert Camus to his first school teacher is to be read by high school students.

The author of The Outsider, The Plague, and The Fall penned the letter after being awarded the Nobel Prize for Literature, to thank teacher Louis Germain.

“Without you, without that kind hand held out to the poor little child that I was, without your teaching, without your example, none of this would have happened," asserts the Nobel Laureate in the letter.

President Macron's wife Brigitte, herself a high school teacher, said she was unable to attend the ceremony due to self-isolation after being in contact with a person infected with Covid-19.

Instead, she paid tribute to Paty in a letter, published yesterday, in which she shared her view of the role of a teacher.

“To be a teacher is to walk into a class and feel that's where you belong,” she wrote. “It is to help construct critical minds...to allow pupils to be free.”

Brigitte Macron said in the letter that she and her husband were in awe of the dignity shown by Samuel Paty's family after his murder.

Akufo-Addo's response to Aflao Chief was wrong; he must apol...
47 minutes ago

NIA suspends registration at GRA, RGD from October 25
49 minutes ago