Have Confidence In Me, I'm An Honest Leader — Akufo-Addo 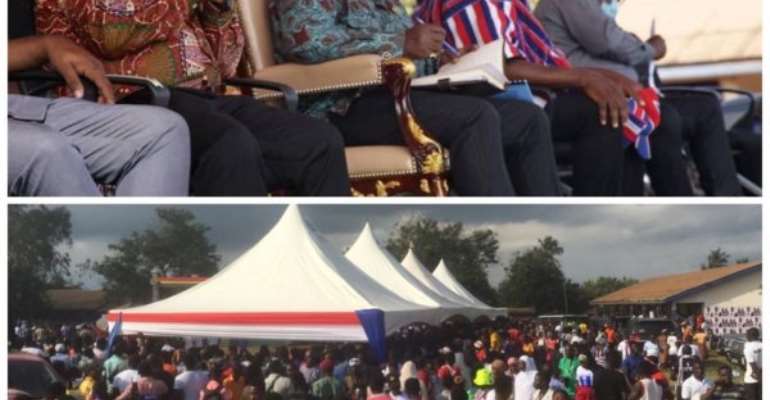 President Akufo-Addo has entreated Ghanaians to continue to have confidence in him and as an honest leader.

He said he had delivered on promises according to the 2016 New Patriotic Party manifesto to the admiration of Ghanaians.

“Some people doubted my stature and credibility to speak to issues because I was then not President.”

President Akufo-Addo was speaking at a durbar in his honour by the Chiefs and people of Afife Traditional Council.

The Chiefs prior to the 2016 elections bestowed a chieftaincy title on the President with the stool name, Torgbui Dzigbordi Dunenyo Fiaga I, to wit,' King of Patience, Peace and Development.'

“I'm sure Ghanaians take me now for delivering on promise.I no longer go with promises, but with records to show,” he echoed.

Mr President is therefore asking Ghanaians, people of the Volta region and especially the electorate in the Ketu North Constituency to judge him by his records and give him four-more to do more for all.

He said the political relationship between the NPP and the people of the region was real and urged the people to climb onto the elephant to better their lots.

He said the calibre of Mr Kofi Dzamesi, Minister of Chieftaincy and Religious Affairs and the NPP Parliamentary Candidate for Ketu North are needed in the legislative house and reminded the people to massively vote for them.

Mr Kwesi Amoako Attah, Minister of Roads and Highways said road infrastructure would be increased to unprecedented levels if the government was retained in the December elections.

He said the Volta region had about 3,962 kilometres of network being constructed with between 60 to 70 percent rates of development and 40 different road projects were tackled currently with 13 new road projects expected to be rolled out in two weeks.

Mr Dzamesi, said the PC on the ticket of the NPP for the Ketu North Constituency said his area was a direct beneficiary of government's social interventions and asked the people to turnout in droves to vote for the NPP.

He said so far, 36 infrastructural projects were built with 48 corresponding scholarship rollouts and an increase in that to 77 next year and appealed to the people to remember the NPP in the elections.

Mr Pius Enam Hadzide, Deputy Minister of Information said many social intervention policies and programmes advanced by the government had touched the core of the population and believed that the Free Senior High School policy would reinvent the “bragging rights bestowed on the people of the Volta region as book-long people and reactivating the entrepreneurial and vocational and artisanal capacities of Voltarians.

Torgbuiga Adrakpanya VI, paramount Chief and President of the Afife Traditional Council, in an address read on his behalf eologised the President as a great and visionary leader and by that sterling leadership changed the face of governance in Ghana.

“We see in you a competent and compassionate President. Under your leadership and guidance, Ghana is winning the war against COVID-19 pandemic…we are proud of you.”

He called for an upgrade of the Ohawu Agricultural College into a full-fledged university to train young people to lead the charge in that sector adding more value to produce at the back of the planting for food and jobs.