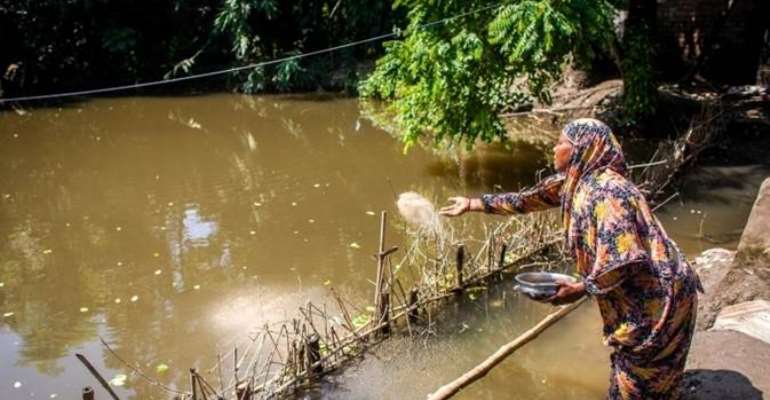 Shona Banu Begum, 55, lives in a village in Bangladesh with her son, daughter-in-law and their two grandchildren. She usually works in a brick kiln, while her son cannot perform heavy labour due to a heart condition.

The Covid-19 pandemic and subsequent Cyclone Amphan took away whatever working opportunities that remained, leaving them in desperate need for more financial aid to make ends meet. (Fahad Kaizer/UN Women)

For almost 25 years, extreme poverty was steadily declining. Now, for the first time in a generation, the quest to end poverty has suffered its worst setback. This setback is largely due to major challenges — COVID 19, conflict, and climate change — facing all countries, but in particular those with large poor populations. The increase in extreme poverty from 2019 to 2020 is projected to be larger than any time since the World Bank started tracking poverty globally in a consistent manner. While COVID-19 is a new obstacle, conflicts and climate change have been increasing extreme poverty for years in parts of the world.

Communities, countries and continents are facing these daunting challenges. A new World Bank report — Poverty and Shared Prosperity 2020: Reversals of Fortune — sheds new light on the threats to poverty reduction and provides recommendations to navigate this tough terrain.

The main causes of this slowdown have been apparent for some time, but their effects have now been amplified by COVID-19.

More than 40 percent of the poor live in conflict-affected countries. The poorest people suffer the most from violent conflict. It destroys their livelihoods while discouraging further investment in their communities. For instance, the extreme poverty rates nearly doubled between 2015 and 2018 in Middle East and North Africa, spurred by the conflicts in Syria and Yemen.

In its most extreme form, violence can lead to wars that destroy lives, households, assets, and natural resources, leaving a legacy from which it can take years to recover.

Climate change is also an ongoing threat to poverty reduction, and it will intensify in coming years. New analyses for this report estimate that climate change will drive 68 million to 135 million into poverty by 2030. Climate change is a particularly grave threat for countries of Sub-Saharan Africa and South Asia — the regions where most of the global poor are concentrated. The impacts of climate change can also include higher food prices, deteriorating health conditions, and exposure to disasters, such as floods, that affect both the poor and the general population.

Especially for the poorest small countries, climate change is perhaps the most vexing challenge, and the problem is not of those countries’ making. Human-induced rises in global temperatures and sea levels are almost entirely a product of levels of energy use by high-income nations and large, rapidly growing middle-income countries.

While violent conflicts and climate change have been threatening poverty reduction for years, COVID-19 is the newest, and the most immediate threat.

The impact of COVID-19 on poverty reduction will be swift and substantial. In 2020 alone, this pandemic could drastically increase the number of people living in extreme poverty by 88 million to 115 million. The novel virus is disrupting everything from daily lives to international trade. The poorest are enduring the highest incidence of the disease and suffering the highest death rates worldwide.

COVID-driven poverty is making inroads in populations that had been relatively spared. The new poor are likely to be more urban and educated than the chronic poor, more engaged in informal services and manufacturing and less in agriculture. Middle-income countries such as India and Nigeria may be home to 75 percent of the new poor.

COVID-19, conflict, and climate change will exact enormous human and economic costs. The Poverty and Shared Prosperity 2020 report shows that the goal of bringing the global extreme poverty rate under 3 percent by 2030, already at risk before COVID-19 emerged, is now beyond reach without swift, significant, and substantial policy action.

The current moment of crisis is extraordinary. No prior disease has become a global threat so quickly as COVID-19. Never have the world’s poorest people resided so disproportionately in conflict-affected territories and countries. Changes in global weather patterns induced by human activity are unprecedented.

How the world responds to these major challenges today will have a direct bearing on whether the current reversals in global poverty reduction can be turned around. The immediate highest priorities everywhere must be saving lives and restoring livelihoods. Some of the policies needed to achieve this are already in place, such as social protection systems. For example, efforts are well under way in Brazil and Indonesia to expand existing cash transfer programs.

While addressing COVID-19 is crucial, countries should continue to enact solutions to the ongoing obstacles to poverty reduction. The Poverty and Shared Prosperity 2020 report provides recommendations for a complementary two-track approach: responding effectively to the urgent crisis in the short run while continuing to focus on foundational development problems, including conflict and climate change.

Too often there is a wide gap between policies as articulated and their attainment in practice, and thus between what citizens rightfully expect and what they experience daily.

Policy aspirations can be laudable, but there is likely to be considerable variation in the extent to which they can be realized, and which groups benefit from them. For example, at the local level, those who have the least influence in a community might not be able to access basic services. At the global level, political economy concerns will be reflected in the extent to which rich and poor nations get access to finite global supplies of medical equipment. It is critical to forge implementation strategies that can rapidly and flexibly respond to close the gaps.

Much about the novel coronavirus remains unknown. The speed and scale with which it has affected the world has overwhelmed response systems in rich and poor countries alike. Innovative responses often come from communities and firms, which may have a better sense of the problems that should be prioritized and may enjoy greater local legitimacy to convey and enforce difficult decisions such as stay-at-home requirements. The faster everyone learns from each other, the more useful it will be.

The Republic of Korea’s widely applauded response to COVID-19, for example, has been attributed in part to intentional efforts to learn from its “painful experience” when responding to the Middle East Respiratory Syndrome coronavirus in 2015.

3. Investing in preparedness and prevention

“Pay now or pay later” may be a cliché, but in the current moment the world is surely learning this lesson again, the hard way. Prevention measures often have low political pay-off, with little credit given for disasters averted. Over time, populations with no lived experience of calamity can become complacent, presuming that such risks have been eliminated or can readily be addressed if they happen.

COVID-19, together with climate change and enduring conflicts, is reminding us of the importance of investing in preparedness and prevention measures comprehensively and proactively.

Contributing to and maintaining public goods requires extensive cooperation and coordination. This is crucial for promoting widespread learning and improving the data-driven foundations of policymaking, and for forming a sense of shared solidarity during crises and ensuring that the difficult policy choices by officials are both trusted and trustworthy.

Finally, effective responses must begin by recognizing what makes these challenges not just different and difficult, but so consequential for the poor. Failure to act comprehensively and urgently will create even bigger challenges in the future. As important as it is to address these shocks currently, there must be relentless focus on the ongoing development agenda of promoting inclusive growth, investing in human capital and productive assets, and protecting them if countries are to sustain poverty reduction.

But reversing even a massive reversal of fortune, such as we are seeing with COVID-19, is necessary and possible. It has been done in the past, in the face of what were regarded at the time as insurmountable challenges – eradicating smallpox, ending World War II, closing the ozone hole – and it will be done again in the future.

The world must commit urgently to working together, and to working better – now especially, and for the long term.