Ei, Not This Galamsey Thing Again? 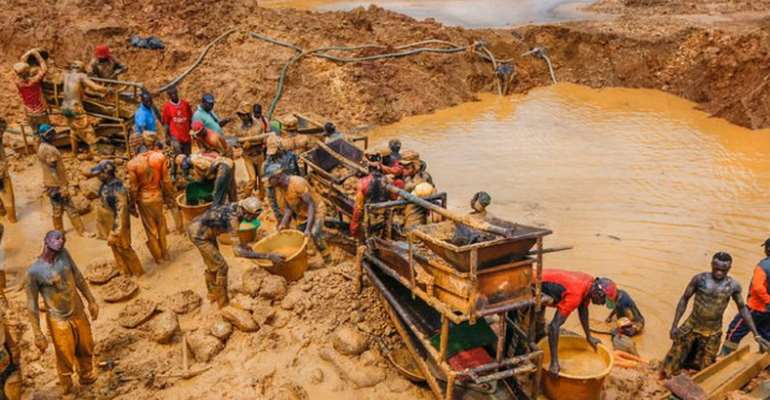 There is an expression in Twi that is as biting, in its contempt for those who express anger without being able to do anything about the cause of their anger, as being whipped on the bare back with a hard cane.

What has brought this enormously melancholy mood upon me?

It is a report that indicates that whilst our Ministers, MPs and would-be are busy criss-crossing the Ghanaian landscape, promising to make life better for our people, by providing them with schools, hospitals and clinics, assistance with farming and a host of other amenities, other people in Ghana are continuing their nefarious activity of DESTROYING the water-bodies that provide drinking water for our people.

Here is the report:

“Six Chinese nationals have been arrested for mining illegally in the farming enclave of Pokukrom, in the Ashanti region.....According to residents of Pokukrom, the only hygienic source of water in the community has been polluted by the activities of illegal mining.”

“Aside [from] the pollution of water bodies, large tracks of farmlands growing cocoa and other crops have been destroyed to serve illegal mining interests.

“During the arrest, the “Sustainable Land and Water Management Task Force” seized four excavators used in destroying large tracts of farmlands and water bodies in the area.

“A member of the Task Force said the team seeks to protect natural resources and protect those in legitimate mining. “We are here to stop individuals parading [as] our security personnel to rob legitimate miners of their produce.

“We are also here to stop the destruction of rivers and illegal miners in the forest by Chinese nationals supported by Ghanaians,” he added.

“Meanwhile, these Chinese nationals arrested in the latest swoop have been transferred to the Kumasi central police for processing. UNQUOTE

But, of course, the arrests, shocking as they are, do not arouse as much curiosity as this question: what has happened to the other galamsey offenders who have been arrested consistently for a number of years since the governments of Ghana realised that if nothing was done about galamsey, Ghana would run short of drinking water, in the long run?

If you Google “galamsey arrests”, you will find the following:

Feb 19, 2020 — The anti-galamsey force has confirmed the arrest of five persons in relation to illegal mining at Akwatia in the Eastern Region;

31 Arrested for engaging in 'galamsey' in Ashanti;

Bekwai: Two Chinese, six Ghanaians nabbed for engaging in galamsey; Jan 14, 2020 — These arrests come after three Chinese nationals were also arrested ... at Asumpa, in the Prestea …;

Feb 11, 2020 — 14 Chinese Nationals Arrested For Galamsey 5. An operation led by the western regional Forward Operation Base of Vanguard;

90 illegal miners arrested in anti-galamsey operation - Aug 11, 2017 — The miners were arrested in some illegal mining areas in the Ashanti, Eastern and Western Regions within a period of two weeks.

Minors getting involved with Galamsey; 8 arrested by OP ...www.todaygh.com › minors-getting-involved-galamsey...

May 3, 2018 — The Operation Vanguard Western Forward Operating Base (FOB) has arrested eight minors and an adult at galamsey sites in K9 in the Benso ...

Dec 26, 2017 — The galamsey operators who were arrested by a combined team of the Ghana National Association of Small Scale Miners (GNASSM), the ...

Oct 2, 2020 — A pit being used for illegal mining (galamsey) has caved in at Ayamfuri in the ... Man Arrested By Police At Agona Swedru For Possessing An ...

Is that enough, as far as arrests are concerned? I should think so! The question to ask is this: what happens after the arrest of galamseyers?

This is what the man put in charge of stopping galamsey in Ghana had to say – himself – about that situation:

QUOTE: “Only 10% of arrested galamseyers have been prosecuted – Frimpong Boateng

Out of the over 1,4000 illegal minersthat have been arrested, only 10% have been prosecuted, Minister for Environment, Science, Technology and Innovation Professor Frimpong Boateng has said...

“He made this disclosure at a press conference in Accra on Thursday, August 16, 2018.

“Of the 247 Chinese nationals that were arrested, only 22 have been convicted”, UNQUOTE [he added].

Where in the world would a Government spend taxpayers' money to arrest offenders who are destroying the taxpayers' drinking water, but prosecute only 10 percent of the arrested offenders?

Maybe now you will fully appreciate why we should feel like – “Going to burn the sea!”