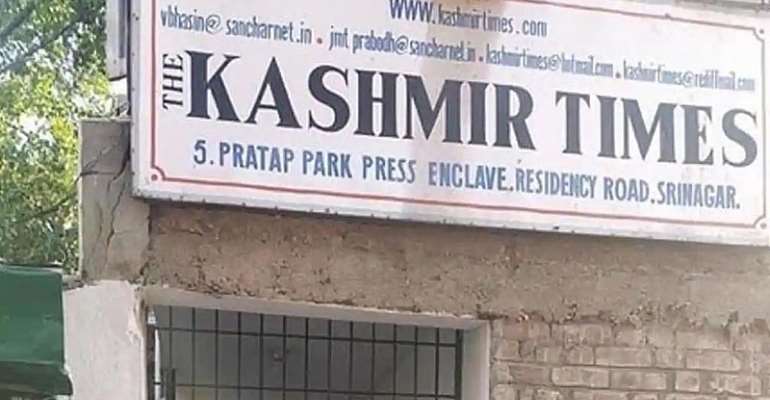 The New Delhi government has sealed off the office of The Kashmir Times, an English-language daily in the disputed Jammu and Kashmir region. Journalists at the paper say they are facing the "most turbulent" phase in recent times.

Anuradha Bhasin, executive editor and publisher of the oldest daily paper in the region said her office in the capital city Srinagar was seized by the Estates Department of the local administration. Earlier she was evicted from her government residence in the Jammu region.

Bhasin has challenged India's communication and internet ban in Kashmir in the nation's highest court, and has been vocal about the state's behaviour in the disputed region, since the 2019 abrogation of partial autonomy.

“On 19 October, our Srinagar office, functioning in a government accommodation allotted to us in 1993-94 (like all newspaper offices in the "Press Enclave"), was locked out without following due process," Bhasin told RFI.

"All our office infrastructure including computers, printers, generators etc are locked inside to disable us from resuming our print edition (suspended since Covid).”

She said the government action against her publication began a year ago. “Last year in August when I went to court against the communication ban impeding the functioning of the media, the state government stopped all advertisements to Kashmir Times.

"Despite financial constraints and hardships we continued to maintain our independence by reporting uncomfortable truths and critiquing the government actions and policies in our editorial and comment.”

'Persecution' and 'suppression' of media

Bhasin called the state's move a “persecution” and said, “it is a part of the suppression of the media in J&K since 5 August 2019.”

Several journalists have been repeatedly either booked, questioned, harassed, or jailed in the recent past in the troubled region. Independent journalists, those working for the international media, and independent organisations in Kashmir have also been the victims of New Delhi's tight scrutiny on the media.

A few months ago, three journalists, including a young female photojournalist, were booked under the draconian terror laws. Another journalist, Aasif Sultan, has been in jail since 2018.

Last month, Aquib Javed, a local journalist was abused and harassed while he was summoned by the local police for his news report.

Majid Maqbool, an independent journalist based in Kashmir told RFI that the move is a warning to other media actors: “These intimidation tactics send out a signal for the rest of the local media and journalists that if they don't toe the official line, there will be consequences for them.”

The Committee to Protect Journalists (CPJ) urged the authorities to stop silencing the media. “We condemn the ongoing targeting and harassment of Anuradha Bhasin and the Kashmir Times. Authorities must stop trying to silence independent and critical voices and should respect press freedom.”

Aliya Iftikhar, CPJ's Senior Asia Researcher told RFI “this is yet another example of authorities in Jammu and Kashmir and India attempting to stifle any independent and critical voices.

Anuradha Bhasin and the Kashmir Times have been staunch advocates of press freedom and should not be targeted for it.”

Many international watchdogs have expressed their concern about India's attacks on the press in Kashmir and elsewhere. The country ranked 142nd on the 2020 World Press Freedom Index which rates 180 countries.

Talking to RFI, Qazi Zaid, editor of the Kashmir Times said that Kashmir has long been facing hard times, especially with regards to freedom of expression and press freedom.

“Whether it be the pre-47 Dogra regime where entire newspapers were banned and editors exiled and then published from Rangoon, or the nineties where houses of editors and journalists were blown up, offices destroyed.

“These are turbulent times, for sure, but it has never been otherwise, with the exception of a window of a few years here and there,” Zaid said.