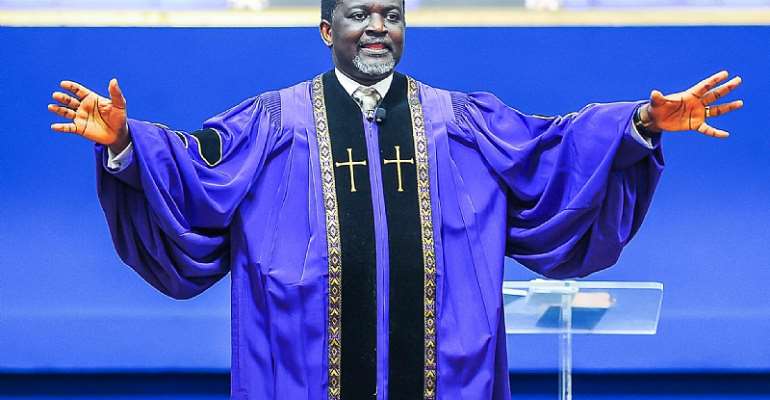 The Founder of Perez Chapel International, Bishop Charles Agyinasare is advising Christians to shun covetousness, as it leads to all manner of societal ills and impeding national development.

He said covetousness is the major cause of bribery, corruption, chiefs selling the same land to different people, influential people using soldiers as land guards to protect their property, lecturers and employers demanding sex from female students and prospective employees in exchange for good grades and jobs, among others.

In a church sermon, Bishop Charles Agyinasare stressed that covetousness has even crept into the church and leads some pastors and church leaders to steal members of other churches.

According to him, the end result of covetousness is as grievous as other sins.

Righteousness is key to the prosperity of nations

Prov. 14:34 righteousness exalts a nation, but sin is a reproach to any people.

The scripture says that delight in integrity, virtue, and uprightness in purpose, thought, and action exalts a nation.

Sin is a problem to any nation. Sin is transgression of the law or lawlessness 1 John 3:4

The scripture we started dealing with last week Ephesians 5:3 says covetousness amongst other sins should not be named amongst even once as Christians. the amplified bible renders it “but immorality (sexual vice) and all impurity [of lustful, rich, wasteful living] or greediness must not even be named among you, as is fitting and proper among saints (God’s consecrated people).

It is the Greek for ‘epithumeo’, which means to fix your desire upon, passion for things whether good or bad, to long for, to lust after. it is also another Greek word ‘pleonexia’ meaning a desire to have more (always in a bad sense) of material possessions, longing to fill one’s desire with material objects outside of god, a matter of extortion, greediness, to have what belongs to others or being greedy of gain.

Today, we have some chiefs who because of covetousness are selling the same land multiple times to different people.

Some families after squandering the monies they received as payment for their land they sold, send other members of the family to say they were not party to the payment and so have taken the case to court and they get judgement to resell the land again.

The big extort from the poor

There are people in authority or who are rich who are forcefully possessing the lands that belong to others Micah 2:2 talks about a similar scenario “they covet fields and take them by violence, also houses, and seize them. so they oppress a man and his house, a man and his inheritance.” the man who steals a goat is jailed but the one who takes by force from the contractor 10% or 20% goes scot-free.

Sex for jobs and grades

we have some bosses in their offices having sex with people’s wives and taking advantage of people’s young daughters in exchange for a job or promotion. in the universities some lecturers are also offering grades for sex.

Some customs officials or GRA officials would line their pocket instead of the government coffers.

The police officer would take a bribe to let the criminal go free.

If you take your document to an office and you don’t give them “goro”, your file would not be found.

Even at the court registry, your file can be lost.

Those who work in people’s shops are stealing from them out of covetousness.

There are pastors who are going after the church members from other churches who they know are very committed to their churches.

Some pastors, because we to want to have a large church, go to park buses at the junctions of other churches so when the members of those churches get to where the buses are packed, they are directed into the waiting buses and carry them to their church service.

Some even prophesy to associate pastors to quit working in their church to start their own church out of envy of that other pastors’ success.

Some show their covetousness in buying oil at wholesale for say GHS50 and sell it for GHS300, 500 & 1,000 calling it special oil. I know you don’t produce the oil and you have to pay the staff in the book shop but don’t ‘Kumi preko’.

Some judges are said to take bribes to twist judgement forgetting that there is a higher judge we all have to answer to one day.

The bible describes covetousness as idolatry. Ephesians 5:5 and Colossians 3:5. 'If you are covetous, God sees you as an idol worshipper. Idolatry is the worship of other gods'.

The first two of the 10 commandments forbids having other gods, making their image and worshipping them. It brings curses to the first to fourth generation.

Your value is not in what you own. we have Christians who boast of the kinds of suits they wear and the cars and houses that they possess. All these properties are just tools to help us accomplish the task of God. This leads many to covet after material things. Some enter politics with nothing and by four years they own chains of stuff. In Ghana, no politician is corrupt, if even he is jailed it was regarded as witch-hunting.

As Christians, we must be above covetousness. Pastors must guard themselves against sticky fingers to offerings and tithes.

3. The source of covetousness is from within

20: And he said, that which cometh out of the man, that defileth the man. 21: For from within, out of the heart of men, proceed evil thoughts, adulteries, fornications, murders, 22: Thefts, covetousness, wickedness, deceit, lasciviousness, an evil eye, blasphemy, pride, foolishness: 23: All these evil things come from within, and defile the man.

a. Covetousness starts from the love of money. 1 Timothy 6:10: For the love of money is the root of all evil: which, while some coveted after, they have erred from the faith and pierced themselves through with many sorrows.

b. Many get into covetousness because they are discontent with everything. Heb. 13:5: ‘Let your conversation be without covetousness, and be content with such things as ye have.

Our conduct must be without covetousness. Sadly, money can cause and has caused the downfall of many Christians because covetousness beguiled them to go after quick money which is always a problem. Prov. 13:11 (Amplified): “Wealth [not earned but] won in haste or unjustly or from the production of things for vain or detrimental use [of such riches] will dwindle away, but he who gathers little by little will increase [his riches]”.

We should not go after quick money. Our system encourages covetousness. We keep showing the youth you can get quick money by staking lotto. Don’t patronise the lottery or any form of gambling. The trader would stuff his bowl instead of the genuine tin. The farmer would inject his produce to make it look ripe.

We need money to live, to enhance the work of God, but that does not mean that we should get it anyhow. Money in and of itself is neither good nor bad, but it can be used for either a good or bad purpose.

Money is a controlling power because it has the ability to make someone get up early to go to work, even when that person is tired or sick. notice some people’s differing attitudes toward God and money. A man will sleep at church but will be wide awake at work. He will be lambasted by customers and respond quietly and politely, but he will threaten to leave the church when an usher gives him a single, mild rebuke. The problem is that he and others like him are subject to the god of money and not to the God of their salvation.

A lot of people who have made a great deal of money have fallen into scandals, which have ruined their lives because they are just covetous. They focused only on the money without acknowledging God, and this is the reason why Jesus warns us about falling into greed.

Resolve never to change your attitude toward God and those you know, as your income rises. Some get a promotion and they backslide. Do not be a slave to money but let money be your slave, as Jesus taught.

In Ghana, many young boys, commonly referred to as “sakawa boys,” sit behind computers and engage in “cyber fraud” to dupe people out of money. [1]

George Sydney Abugri, Cybercrimes in Ghana: The Agbogbloshie Connection. “One young Ghanaian even hacked into the accounts of a U.S. Congressman.” [2]

Sammy Szandu, “The sakawa menace: any solutions?” “a worrying spiritual dimension is behind much of their activity. They perform many scary rituals, spend nights at cemeteries, sleep in coffins, eat from dustbins, and some have been barred from bathing for months. [3] even beheadings have been traced to sakawa. [4]

From top to bottom, they are all greedy, says the scriptures.

The labourer is covetous, the judge is, the politician is, the pastor is, the teacher is and so is the trader. They hear but don’t do.

Ezekiel 33:31: ‘And they come unto thee as the people cometh, and they sit before thee as my people, and they hear thy words, but they will not do them: for with their mouth, they shew much love, but their heart goeth after their covetousness’.

People are stealing at church. Some of those who count offering and some ushers steal at church.

Covetousness is as grievous as other sins

Romans 1:29: ‘God judges the covetous and so don’t be deceived into thinking that God will not judge Christians. 1 Pet. 4:17: ‘For the time is come that judgment must begin at the house of God: and if it first begin at us, what shall the end be of them that obey not the gospel of God?’

God will purge the church, and the Bible says that it is a fearful thing to fall into the hands of God. Those who do such things forget the anger of God. Eph 5:6: ‘Let no man deceive you with vain words: for because of these things cometh the wrath of God upon the children of disobedience’.

7: ‘Be not ye, therefore, partakers with them’.

We will mourn, celebrate and learn from your life – NDC pays...
42 minutes ago