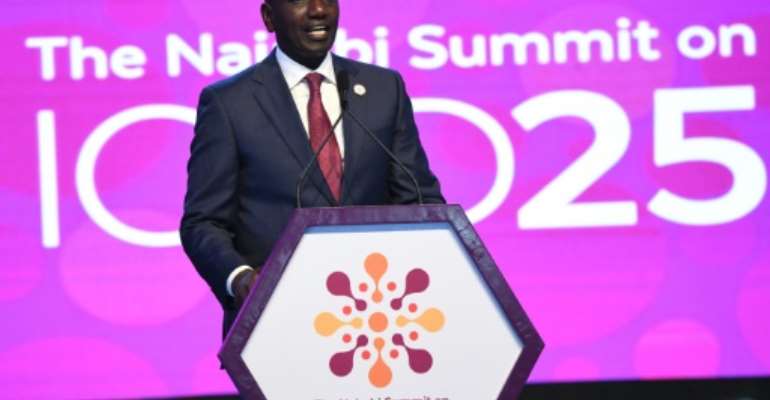 Ruto was brought into the fold in the aftermath of Kenya's 2007 election to reconcile political and ethnic violence that erupted between his Kalenjin supporters and Kikuyu voters backing Kenyatta. By SIMON MAINA (AFP/File)

Kenya's deputy president William Ruto is being sidelined by his political allies in what analysts say is a concerted strategy to block the ambitious leader's promised elevation to the top job in 2022.

A marriage of convenience brokered between Ruto and President Uhuru Kenyatta to assure them victory in the 2013 and 2017 elections is fraying out in the open, with juicy details splashed each day on the front pages of Kenyan newspapers.

Kenyatta and Ruto "are at loggerheads and although they have not directly sparred in public, their words and deeds indicate a deep chasm between erstwhile bosom buddies who ascended to power in 2013 with boisterous glee, pomp and glamour," the Daily Nation wrote in an October 10 editorial.

The alliance has been crumbling since Kenyatta stunned the nation by striking an unexpected deal with his longtime rival Raila Odinga, pledging to work together to promote unity after a drawn-out 2017 election battle between the two left dozens dead.

Known universally as "the handshake", the March 2018 pact between Kenyatta and Odinga eased the political violence but saw Ruto's relevance dwindling as the new partnership took centre stage in State House.

Ruto was brought into the fold in the aftermath of the 2007 election to reconcile political and ethnic violence that erupted between his Kalenjin supporters and Kikuyu voters backing Kenyatta.

In exchange for reconciliation and guaranteeing his support in the 2013 and 2017 elections Ruto -- a 53-year-old leader renowned for political cunning and determination -- was promised the ruling Jubilee Party's candidacy in the 2022 vote.

However Odinga, a 73-year-old opposition veteran and former Ruto ally himself, is now emerging as the likely successor to Kenyatta, who cannot run for a third term.

The shifting alliances represent "growing pressure from family members and leading allies around Kenyatta to say that power cannot be transferred to Ruto, reflecting the concerns of many Kikuyu voters", said Nic Cheeseman, a political scientist at the University of Birmingham.

"Ruto has a reputation for being somebody who is prepared to use violence and among the Kikuyu community, and many others, people are worried about what he would do if he had absolute power. He is the most feared political leader in Kenya," he added.

Visible and influential during Kenyatta's first term, Ruto hardly appears in public anymore on behalf of the government, his absence magnified by the prominent rise of Odinga in his stead.

His gradual erasure from the public eye "began with some of his supporters being charged with corruption, and him not being invited to particular meetings", said Kenyan political analyst Nerima Wako Ojiwa, adding: "It's accelerating."

In October, the Jubilee Party formally proposed removing Ruto as its vice president while police have banned his political gatherings after clashes between pro-Ruto and pro-Kenyatta youth left two people dead.

Ruto's marginalisation also comes as Odinga and Kenyatta pursue constitutional changes, with a list of proposed reforms expected to be unveiled in a much-anticipated report in coming days.

The amendments seek to address the cycles of violence around election time, but have spurred rumours Kenyatta is angling for a yet-to-be-created prime ministerial post through a 2022 alliance with his erstwhile foe Odinga.

The vote is still two years away but leaders are jostling for the limelight as headlines are dominated by the electoral race -- where Ruto appears the only opposition candidate.

Ruto, analysts say, is trying to position himself as a man of the people, one at contrast with an adminstration preoccupied with its own future during a pandemic that has hit the poor hard.

Trying to appeal to voters beyond his Rift Valley stronghold, Ruto has claimed to speak for the "hustlers" trying to make ends meet under the leadership of "dynasties" -- a thinly veiled reference to the Kenyatta and Odinga families anchored at the heart of Kenyan political power since independence in 1963.

"The problem is people who live in ivory towers, who don't understand the challenge of ordinary people," Ruto said recently.

Murithi Mutiga, an analyst from the International Crisis Group, said Ruto "was running a very peculiar campaign by Kenyan standards", appealing to class instead of ethnicity, an approach worrying the political establishment.

Ojiwa said the strategy would be to embarrass and frustrate Ruto by whatever means possible so that he would resign, thereby avoiding more drastic measures to usurp him that could kick off fresh waves of political and ethnic violence.

"But he is too stubborn for that," said Ojiwa.