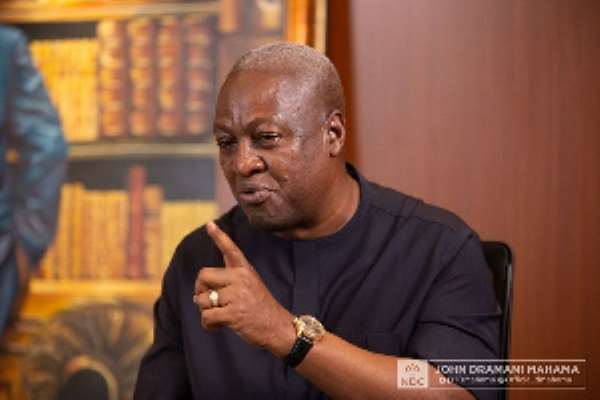 The Dean of Academic Affairs at the Ghana Armed Forces Command and Staff College (GAFCSC), Dr. Vladimir Antwi-Danso, has condemned recent attacks on the Electoral Commission and its boss, Jean Mensa by the flagbearer of the opposition National Democratic Congress, John Dramani Mahama.

According to him, President Mahama's claims that the impending elections could be flawed is “unfortunate”.

The presidential candidate of the National Democratic Congress (NDC), John Dramani Mahama last Thursday called the integrity and professionalism of the EC into question, warning that his party will not accept flawed election results.

Addressing party supporters and sympathizers at Abura in the Central Region, Mr. Mahama said the Electoral Commission (EC) was bent on organizing a flawed election.

“We are not trouble makers. We want to make sure that all of us believe in this election so that if you win or lose, you are prepared to accept. But when we complain, they think that we are just causing trouble,” Mr. Mahama warned.

“This can lead this nation to chaos because I have said it, on December 7 when this election is flawed, we will not accept it. Who accepts a flawed election? Nobody. And everything the Electoral Commission is doing is showing that we are heading to a flawed election,” the former president further warned.

But Vladimir Antwi Danso speaking to journalists in Accra on Monday advised President Mahama to desist from such attacks.

“It is rather unfortunate that most often, especially during elections, we try to take on our institutions which have been created to strengthen our democracy,” the International Relations expert said.

He warned that such comments must not be entertained by Ghanaians and tasked every Ghanaian to rally behind constitutionally mandated institutions as it is the only way to defend our democracy. He further encouraged Ghanaians to fight personalities that only attack state institutions to advance their interests.

Dr. Antwi-Danso explained that his admonition to the former president and other politicians who share his views is not an attempt to gag him but to protect the sanctity of constitutional bodies.

“I am not against him [Mahama] expressing his opinion, but the person must know that his actions and utterances must not undermine our democracy. A strong democracy is when the institutions are allowed to work and we must not paint them black to the people,” he advised.