Nigeria in shock after deadly shooting of protesters 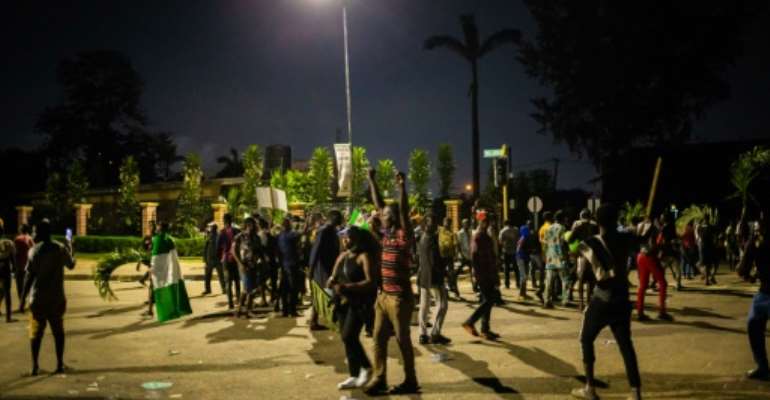 Witnesses said armed gunmen opened fire on a crowd of over 1,000 people to disperse them after a curfew was imposed to end spiralling protests over police brutalityÂ . By Benson Ibeabuchi (AFP)

Nigerians were in shock on Wednesday after a deadly shooting of peaceful protesters in the biggest city Lagos that Amnesty International blamed on security forces.

There was no immediate death toll from the incident on Tuesday evening in which witnesses said armed gunmen opened fire on a crowd of over 1,000 people to disperse them after a curfew was imposed to end spiralling protests over police brutality.

Sporadic gunshots could be still be heard in Lagos on Wednesday morning, an AFP journalist said.

"This is the toughest night of our lives as forces beyond our direct control have moved to make dark notes in our history," Sanwo-Olu said on Twitter, releasing pictures of him visiting hospitals in the early hours of Wednesday.

Anger over abuses by the police's loathed Special Anti-Robbery Squad (SARS) erupted into widespread protests about two weeks ago, drawing thousands of people on to the streets. By Benson Ibeabuchi (AFP)

"I recognise the buck stops at my table and I will work with the FG (federal government) to get to the root of this unfortunate incident," he added.

Amnesty International said several people were killed by security forces and that they were "working on verifying" the death toll.

The Nigerian army did not issue a direct statement, but labelled reports of soldiers shooting on protesters as "fake news" on Twitter.

Anger over abuses by the police's loathed Special Anti-Robbery Squad (SARS) erupted into widespread protests about two weeks ago, drawing thousands of people on to the streets.

Police have ordered anti-riot units to be deployed around the country. By Kola Sulaimon (AFP)

Sanwo-Olu had announced an indefinite curfew from Tuesday afternoon across Africa's largest city after claiming the demonstrations had been hijacked by criminals.

Pictures and videos showing scenes of chaos from the shooting were widely shared on social media.

"5am. We're still getting calls from people from Lekki. All through the night. Some hiding near there, some hurt, some just completely panicked," Nigerian podcaster Feyikemi Abudu, who has been actively involved in the protests, said on Twitter.

US presidential candidate Joe Biden urged the president and military "to cease the violent crackdown on protesters in Nigeria, which has already resulted in several deaths."

"The United States must stand with Nigerians who are peacefully demonstrating for police reform and seeking an end to corruption in their democracy," Biden said in a statement.

"I encourage the government to engage in a good-faith dialogue with civil society to address these long-standing grievances and work together for a more just and inclusive Nigeria."

Protests have snowballed from anger over police violence to broader demands from the youth for sweeping changes in Africa's most populous nation.

Nigeria, where the median age is 18, is a tinderbox of profound economic and social grievances.

Several celebrities who have supported the protesters have added their voices to calls for President Muhammadu Buhari to resign.