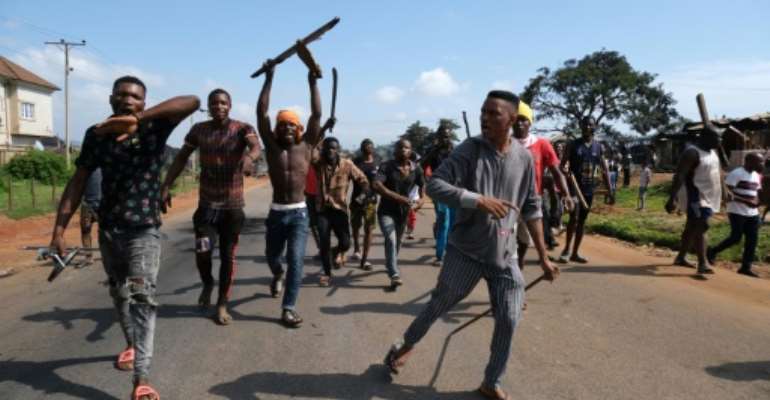 Armed men opened fire on a crowd of more than a thousand people in Nigeria's main city Lagos on Tuesday, four witnesses said, as rallies against bad governance showed no sign of abating.

It was unclear who shot at protesters who defied an indefinite curfew imposed hours earlier as city officials claimed the youth-led protests that began 12 days ago had been hijacked by criminals.

Scenes of protesters removing a bullet from someone's wound and pleading for help were broadcast in a live video by DJ Switch, a popular disc jockey, to 150,000 Instagram viewers.

As the lockdown went into force in Africa's largest city at 4 pm (1500 GMT), protesters sang the national anthem and pledged to remain out on the streets.

"Are you afraid?" a man shouted to the flag-waving crowd from a stage near a toll booth in the city centre that has become the focal point of the demonstrations.

"We will stay here peacefully," 32-year-old demonstrator Akin told AFP. "This is our new home."

The government initially said it would impose a 24-hour curfew in Lagos and a city spokesman later clarified to AFP that it was indefinite and around the clock.

Anger over abuses by the police's loathed Special Anti-Robbery Squad (SARS) had in recent days broadened into a movement against bad governance more broadly.

Lagos state governor Babajide Sanwo-Olu ordered the shutdown after he said the protests had "degenerated into a monster that is threatening the well-being of our society".

"Lives and limbs have been lost as criminals and miscreants are now hiding under the umbrella of these protests to unleash mayhem," he wrote on Twitter, insisting that only essential workers should stay out on the streets.

Witnesses told AFP that a police station was set ablaze in the Orile Iganmu district of the city on Tuesday. They said police opened fire on protesters, wounding several.

In the capital Abuja, security forces violently dispersed crowds and thick black smoke could be seen over the city, an AFP photographer said.

Tensions were high after police reported that three people had been killed in clashes in the city on Monday.

Violence spread as well to the largest northern city of Kano as hundreds of people went on a rampage on Tuesday, burning vehicles and looting businesses according to an AFP reporter at the scene.

Officials have called for the demonstrations to be suspended to give the authorities time to make good on its pledges.