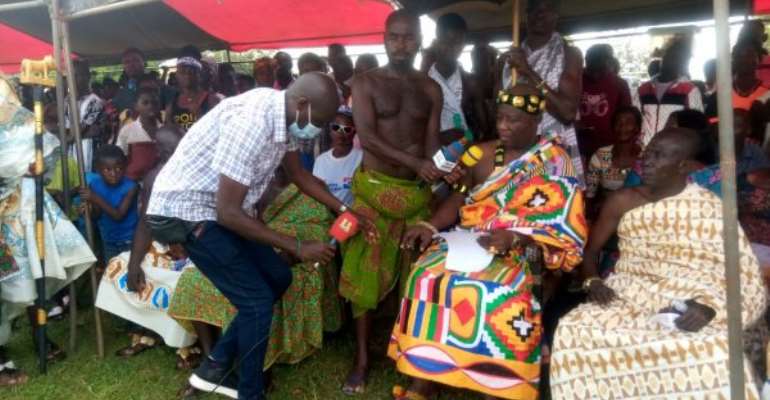 Nana Obuobi Forkuo I, the Chief of Kwapong in the Asunafo South District of the Ahafo Region has lauded President Akufo-Addo's vision and efforts towards national reconstruction.

He admitted that though traditional authorities were barred from engaging in active partisan politics, as the embodiment of the people, chiefs and queens also had the responsibility to support any development-oriented government.

Nana Forkuo I gave the commendation when the Vice President, Dr Mahamudu Bawumia addressed a durbar of chiefs and people of Kwapong as part of his day's visit to parts of the Ahafo Region.

The chief noted that the government had strengthened the National Health Insurance Scheme, while the Free Senior High School (FSHS) Programme was achieving significant and desirable results.

"My son is a beneficiary of the FSHS and I will commend the government in that regard", Nana Forkuo I indicated.

He called on the electorate to vote wisely when they go to the polls on December saying Kwapong had remained a stronghold of the New Patriotic Party (NPP) since 1992, but the township continued to lag behind in development.

He appealed to the government to construct the Kwapong town roads and provide the community with a Police Post to improve on security.

The Chief said erosion had virtually taken over the township because of poor drainage systems and also appealed to the government to improve physical infrastructure at the Kwapong Nursing Training College.

While praying for a peaceful elections, Nana Forkuo I advised the leadership and followers of political parties to conduct their campaigns devoid of insults and personality attacks.

Dr Bawumia gave the assurance government would shape the Kwapong town roads and provide a Police Post in the area as soon as possible.