South Africans aren't being protected from fake sanitisers: what needs to be done 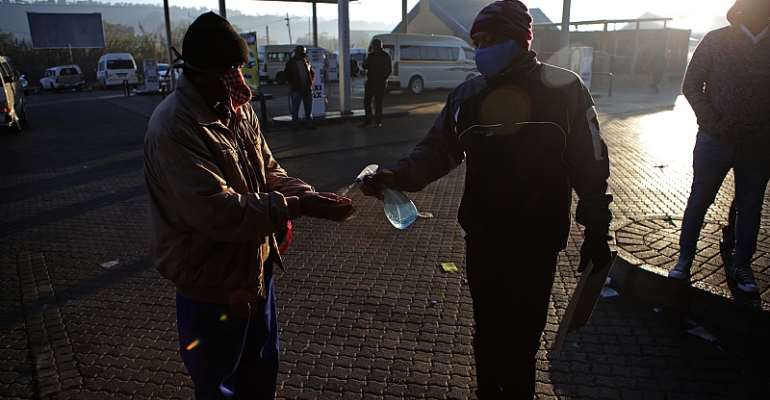 The WHO recommends sanitisers with an alcohol content of at least 70%. - Source: Phill Magakoe / AFP via Getty Images

A wave of panic buying struck many countries when national states of disaster were announced in response to the global COVID-19 pandemic. Overnight, toilet paper, cleaning products and hand sanitisers became the most sought-after products on the market .

This was true in South Africa too. Production facilities for raw materials of hand sanitisers experienced an increase of nearly 400% in bulk orders . Suppliers could not keep up with sudden mass orders for hundreds of thousands of litres .

In response to the shortage, governments across the world adopted temporary policies. These allowed for the production of hand sanitiser by entities that weren't registered manufacturers and for alcohol distillers to shift their production to hand sanitisers.

Concern has been growing about safety issues related to hand sanitisers – in South Africa as well as other countries. But South Africa has been behind the curve in putting in place measures to ensure products are safe.

In the absence of a vaccine, hand hygiene has become a critical part of the response to COVID-19. Washing hands at regular intervals during the day is viewed as essential. If water and soap are unavailable, hand sanitisers have served as a useful alternative.

The purpose of a hand sanitiser is to disrupt the enveloping lipid membrane of SARS-CoV-2. This kills the virus . The World Health Organisation (WHO) has recommended that consumers use an alcohol-based sanitiser with an alcohol content of at least 70%, based on effective and fast anti-microbial activity .

Water as a diluent;

Glycerol to prevent drying out users' skin; and

Hydrogen peroxide to inactivate contaminating bacterial spores in the solution .

The guide, as well as statements issued by the US Food and Drug Administration, recommends that perfumes or dyes not be added due to risk of allergic reactions . The Australian Department of Health goes so far as to say that hand sanitisers may not contain any other active or inactive ingredients. These include colourants, fragrances or emollients.

But the policing of these conditions has been weak in countries like South Africa.

In the US, the Food and Drug Administration has played a leading role in identifying inferior products. By early October more than 200 products had been recalled that contained either methanol, 1-propanol or less than the required amount of alcohol.

Methanol is a cheaper alcohol, but repeated use of methanol-based hand sanitiser can cause it to be absorbed through the skin. This can cause chronic toxicity, hallucinations or even death in extreme cases . As for 1-propanol, not to be confused with 2-propanol, the substance can be toxic and life-threatening when ingested and is therefore not an acceptable ingredient for hand sanitisers .

Countries across the globe have detected other toxic substances in hand sanitisers that can also pose acute or chronic toxicity. These include glutaraldehyde , polyhexamethylene biguanide and ethyl acetate .

Sub-potent levels of alcohol have been recorded in the Netherlands , the UAE , Australia , Guyana , Kenya , Nigeria and Rwanda . Zambia recalled products from a number of producers, including South Africa.

In South Africa, the Bureau of Standards recently issued a press release, raising concerns about substandard sanitisers produced by “unscrupulous” manufacturers who were falsely claiming that their products had been certified . Reference was made to low-quality versions that can trigger skin allergies and can damage the skin, often presenting as a form of eczema.

In May 2020, a laboratory found that two out of the 11 hand sanitisers bought from retailers in the city of Pietermaritzburg contained 1-propanol. Four contained only between 46% and 67% alcohol while claiming to contain 70%.

Yet no hand sanitiser products in South Africa have been recalled. The country also has no regulatory system in place to assess hand sanitisers intended for household use. Companies have been required to voluntarily comply with the national standard on disinfectant alcohol-based hand-rubs, but this is woefully inadequate.

Part of the Consumer Protection Act seeks to ensure that consumers are provided with adequate evidence-based information. This is critical, especially since consumers are inundated with all sorts of brands and types of sanitisers that are intended for frequent use.

A number of urgent steps need to be considered.

Firstly, labelling requirements should be standardised and enforced. The following information should be indicated on every bottle of hand sanitiser:

a list of the active and inactive ingredients and the adverse effects they may cause;

the batch code and expiry date; and

the full address of the manufacturer.

Secondly, public awareness programmes about correct hand hygiene techniques and the safe use, storage and effectiveness of hand sanitisers should be launched.

Thirdly, products that don't comply with specifications or are not properly labelled should not be sold or provided in public spaces.

Fourth, a national task team should be established to investigate the regulatory framework and current levels of compliance.

Fifth, imports of raw material used in manufacturing of hand sanitisers and ready-to-use formulated products should be regulated more effectively. Likewise, products that are exported from South Africa to neighbouring countries should be monitored better.

Finally, environmental health inspectors or the National Regulator for Compulsory Specifications should mercilessly track down fake products and have them confiscated and destroyed.

Dr Tracy Muwanga, a trans-disciplinary postdoctoral fellow in the faculties of Law and Natural and Agricultural Sciences at the University of Pretoria, contributed to this article.

Willeke de Bruin receives funding from the University of Pretoria's UNICEF One Health for Change project.

Lise Korsten does not work for, consult, own shares in or receive funding from any company or organization that would benefit from this article, and has disclosed no relevant affiliations beyond their academic appointment.

By Lise Korsten, Professor in the Department of Microbiology and Plant Pathology and Co-Director at the Centre of Excellence in Food Security, University of Pretoria And