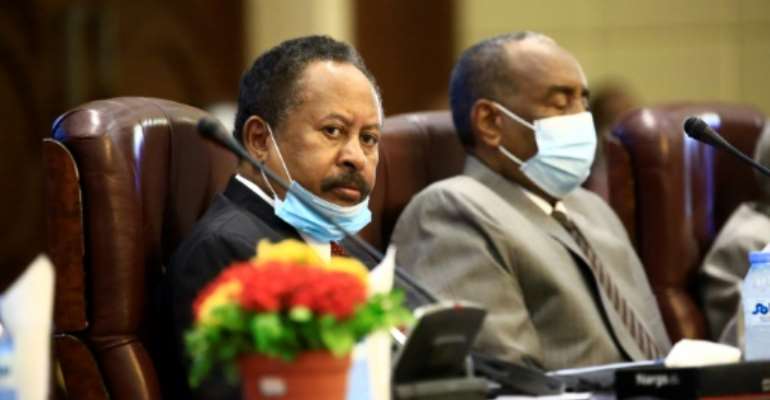 Sudan's Prime Minister Abdalla Hamdok has hailed US plans to remove the northeast African country from its state sponsors of terrorism blacklist. By ASHRAF SHAZLY (AFP/File)

Sudan on Tuesday hailed US plans to remove it from its state sponsors of terrorism blacklist, saying the move would facilitate debt relief and pave the way to economic recovery.

Sudan is one of four nations branded by the United States as a state sponsor of terrorism -- along with Iran, North Korea and Syria.

The designation has severely impeded economic development in the northeast African nation, with few major foreign investors willing to run afoul of US laws.

"Today, we have debts of more than $60 billion. This decision paves the way for exemption."

In a landmark announcement, US President Donald Trump on Monday declared his readiness to remove Sudan from the US blacklist.

"At long last, JUSTICE for the American people and BIG step for Sudan!" Trump wrote on Twitter, vowing to delist Sudan as soon as the compensation is "deposited".

Bashir was ousted in April 2019 after mass protests against his rule, and the country's transitional government has made lifting the US sanctions a priority.

The government agreed to pay hundreds of millions of dollars in compensation to American families of victims of past attacks blamed on Sudan.

On Monday, Trump said Sudan had agreed to a $335 million compensation package for victims and relatives of 1998 US embassy bombings in Kenya and Tanzania.

Sudan's central bank governor Mohamed al-Fatih said during the news conference that the compensation payments had been made.

Sudan's ousted president Omar al-Bashir gestures during his trial in the capital Khartoum on October 20, 2020. By Ebrahim HAMID (AFP)

Earlier this year, Sudan had paid compensation to families of victims of a bomb attack on the USS Cole off Yemen's coast in October 2000.

Sudan always denied any involvement but agreed to the settlement to fulfil US conditions for its delisting.

"We are not terrorist people but we were afflicted by a regime that made us appear so," he told a news conference.

Finance Minister Heba Ali hailed the US decision but said fundamental changes "will not be immediate".

The delisting allows Sudanese financial institutions to establish ties with their counterparts abroad, and facilitate money transfers, she said.

It will also allow Sudan to apply for debt relief initiatives, she added.

Sudan's debts to the US, which amount to $700 million, will be have be scheduled to be able to pay them, the minister said.

People on the streets of Khartoum expressed hopes that the planned US move would boost the Sudanese economy.

"We are optimistic about this decision, as it gives Sudan a new horizon, an awakening and pushes us forward," said one of them, Adem Mostafa.

Another said he hoped the Sudanese government would not squander the opportunity.

"The government has to begin with reforms, and face all the challenges and the matters that have been sabotaged during the past 30 years," said Hashim Abdul Fatah.