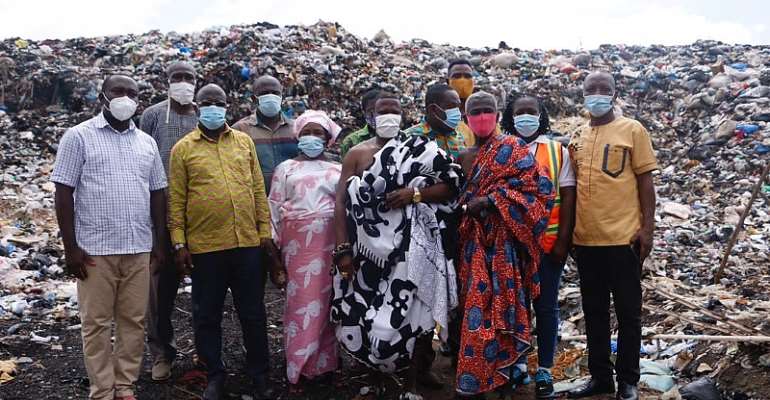 The Chief of Assakae in the Effia Kwesimintsim Municipal Assembly (EFKMA) in the Western Region, Nana Asante Kwadwo II, and his people have heaped loads of praises on the Ministry of Sanitation and Water Resources (MSWR), for embarking on an exercise to clear an aged dumpsite in his area.

According to the chief, the exercise was very timely, adding that the Assakae dumpsite had become a headache for the community. He also applauded the sector Minister, Madam Cecilia Abena Dapaah, and her ruling New Patriotic Party (NPP), for their relentless efforts to make Ghana a clean country.

Nana Asante Kwadwo II made the commendation while speaking to journalists at Assakae in the EFKMA where the emergency national refuse evacuation exercise being undertaken by the MSWR kick-started in the Western Region on Tuesday (October 21).

He described the evacuation of the dumpsite as a “huge relief.”

For his part, while applauding the MSWR, the Municipal Chief Executive (MCE) for EFKMA, Mr Kofi Acquah (alias Adwumawura), who was present at the dumpsite, revealed that the assembly would build public toilet facilities and also station waste containers at the site, following the evacuation exercise.

These facilities, he, however, stressed would be kept under very strict hygienic conditions when completed.

Speaking to the media, scores of Assakae residents expressed how relieved they were for the exercise.

“We can now heave a sigh of relief, especially when the government has come to our aid to clear this stinking aged heap of the dumpsite,” one of the residents, Ato Mensah, expressed.

According to Mr George Amoako, another resident, the dumpsite has been contributing to several sicknesses in the community.

“And so it is a good thing that the MSWR are evacuating our dumpsite,” he lauded.

The exercise is expected to continue in other dumpsites in the region.