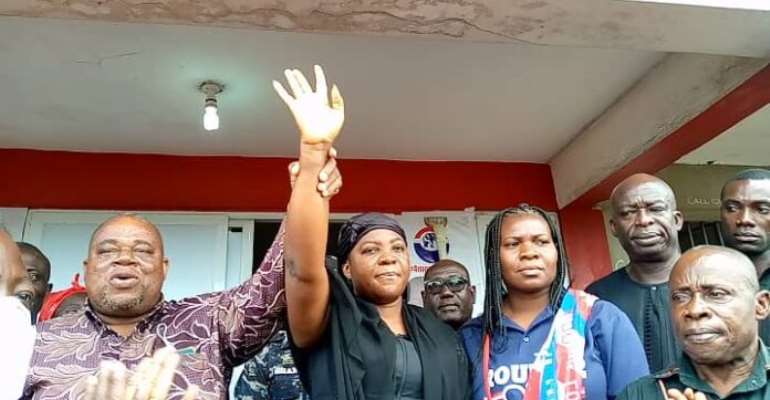 The Wife of the late Mfantseman Member of Parliament, Ophelia Quansa Heyford has filed her nomination forms at the Electoral Commission office as the ruling New Patriotic Party(NPP) Parliamentary candidate to enable her to contest the upcoming December 7 election.

Addressing the media after the filing, Mrs Quansah Hayford urged party members and supporters to help her win the election to retain the seat for the party, as she cannot do the work alone.

“I promise to work hard to ensure that the NPP wins the seat and honour the memory of my late husband and continue with his developmental agenda for Mfantseman. I will ensure that all my husband’s unfinished business in the constituency is completed when I win.”

The New Patriotic Party Chairman for Mfantseman, Alhaji Jibril Adam on his part thanked the NPP National Executive Committee for accepting their proposal to select the late MP’s wife as Parliamentary Candidate.

He promised that he together with other executives will give her all the needed support to ensure she wins and retains the seat for NPP.

Some of the Executives who were present during her filing are NPP Regional Secretary Takyi Mensah, NPP Organizer Pessy Dennis, NPP Regional Woman Organizer and the Constituency Party Executives.