Bawumia Replies Mahama's 'What Have You Done With GHS140bn Borrowed' Question 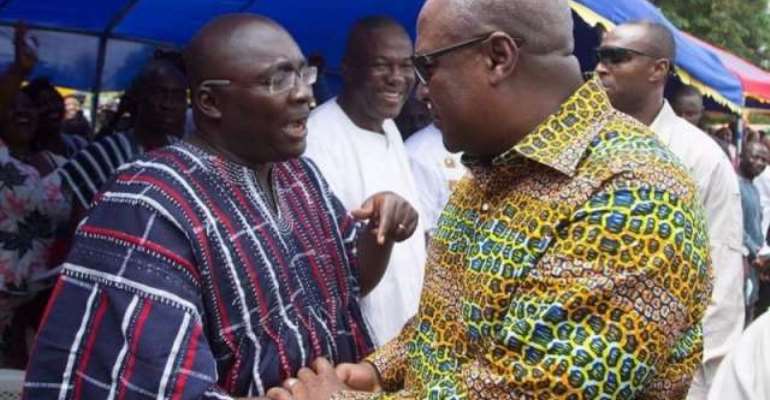 Vice-President Dr Mahamudu Bawumia has responded to the question posed by the flagbearer of the main opposition National Democratic Congress (NDC), Mr John Mahama, on what the government has used the GHS140 billion it has borrowed since its assumption of office in January 2017.

Mr Mahama, during one of his campaign tours in the Volta region, asked that question.

Addressing the chiefs and people of Sogakpe in the South Tongu constituency, Mr Mahama expressed concern that the government has “very little” to show for all the loans it has taken.

He explained that between 2013 and 2016, his administration borrowed a little more than GHS54 billion and the record is there for all to see far as roads, schools, healthcare infrastructure, electricity, water, harbours and airports, among others, are concerned.

“In four years, the Akufo-Addo government has borrowed more than GHS140 billion”, he said.

“So, the simple question Ghanaians should ask is: what have you done with the money?”

But Dr Bawumia on Monday, 19 October 2020, replied the former President with a list of projects undertaken by the Akufo-Addo-led government.

The former president John Mahama recently asked what the Government of the NPP has used the monies it has borrowed during its term for. I will provide the former president with some answers and only ask that he takes his time to read.

I will provide the former president with some answers and only ask that he takes his time to read.

1. I note that the former president himself had answered his own question in the video clip below:

2. I will nonetheless provide some information for the education of the former president.

3. The NPP in its first term has undertaken more infrastructure projects than any other Government in its first term in the Fourth Republic. The latest data shows that in total, we have undertaken 18,891 projects, completed 10,153 and have 8,738 ongoing. The details of these projects can be found at the delivery tracker portal:

4. The infrastructure projects across all sectors can be found in all 260 districts in the country. Some of the projects include:

• 79 steel, concrete, and footbridges across the country.

46 of them are completed.

• Rehabilitation of selected roads in Agbogbloshie - main road and links

• Children and Maternity block at KATH

• 307 well-equipped state of the art ambulances

WATER AND SANITATION (Ongoing and Completed)

250 No. Boreholes under construction at Daffiama-Bussie, Lawra, Sissala West, Nandom, and Jirapa Districts all in the Upper West Region.

Drilling of 30no. boreholes for the development of 7no. systems in fluoride prone communities in Bongo in the Upper East Region

rehabilitation and expansion of 151 Small Town Piped Water Systems across the country. Some of the systems that have been rehabilitated are in Vakpo, Taviefe, Akatsi in the Volta region, Mim in the Bono region, Manso Nkwanta, Manso Atwedie Juaben and Seniagya in the Ashanti region.

• No Cholera cases recorded since 2017

o construction has started on the first phase of the Works of the redevelopment of Mankesim Market Complex and Dome Market.

A total of 68 sports infrastructure projects have been undertaken since 2017. These include:

• Construction of ten (10) 5,000 seater Youth and Sports Centres of Excellence in ten regions of the country are at various stages of completion.

• Renovation works at the Essipong and the Kumasi Sports Stadia have commenced;

• We have also completed or continuing the construction of at least 29 AstroTurfs in several communities across the country, including Madina, Kyebi, Dompim Pepesa in Tarkwa Nsuem, in Manhyia South, Oda, Walewale, Fadama.

• Construction of a newly designed and funded New Edubiase Sports stadium is ongoing (the initial construction by the NDC was without documentation, design or funding)

• The following sea defence projects were commenced after 2017 and are ongoing:

• The following sea defence projects were ongoing, when we came into office and we have completed them:

• A Multi-Purpose Container Terminal at Takoradi commenced in 2019 and

i. Construction of Tamale Airport Phase III is 30% complete

The railway projects, being undertaken since 2017, include

• Construction of the new standard gauge Western Line (Takoradi to Kumasi) has commenced.

• The Kojokrom to Manso section of 22km is ongoing.

• 190 vehicles to the Ghana Immigration Service

• We started power extension and rural electrification to 3844 communities out of which 2824 communities are fully connected and 1020 are ongoing.

• Relocation of Karpower Barge to Takoradi

The infrastructure in the education sector is massive.

• We have undertaken a total of 3,251 infrastructure projects in the education sector. Of these, 1,597 have been completed (including 448 senior high school projects) and 1,654 ongoing.

• Somanya University (which was inherited) has been completed

• Upgrading and Rehabilitation of Polytechnics and Technical Institutes

• Construction of 2 new vocational training centres for foundry and machining

• Free WiFi to 722 Senior High schools and 46 Colleges of Education.

HOWEVER, LET ME EMPHASIZE, WE ARE NOT ONLY BUILDING INFRASTRUCTURE. WE ARE BUILDING A NATION

Other policies implemented include:

1. Planting for Food and Jobs

2. Response to the COVID-19 pandemic.

a. Additional 24,285 health professionals recruited between March and June 2020

f. Waiver of income tax on the 50% additional allowances

i. 50% electricity discount for non-lifeline consumers

m. Provision of a syndicated GHC3 billion to support industry, especially in the pharmaceutical, hospitality, service and manufacturing sectors.

4. The NPP government has reduced import duties by between 30% and 50%.

7. The NPP government has abolished the fees for postgraduate medical training

8. The NPP government has increased the share of the DACF to PWDs by 50%

9. The NPP government has abolished market tolls for kayayei.

13. The NPP government has doubled the capitation grant.

14. The NPP government has expanded School Feeding by 78%

15. The NPP government has expanded LEAP by 53%

16. The NPP government has absorbed the cost of BECE and WASSCE exam registrations

18. The NPP government has rescued the financial system the NDC left on the brink of collapse and spent GHS21 billion to save the deposits of 4.6 million depositors

It is clear that the NPP government has not used the monies borrowed to invest in guinea fowls that subsequently flew to Burkina Faso.