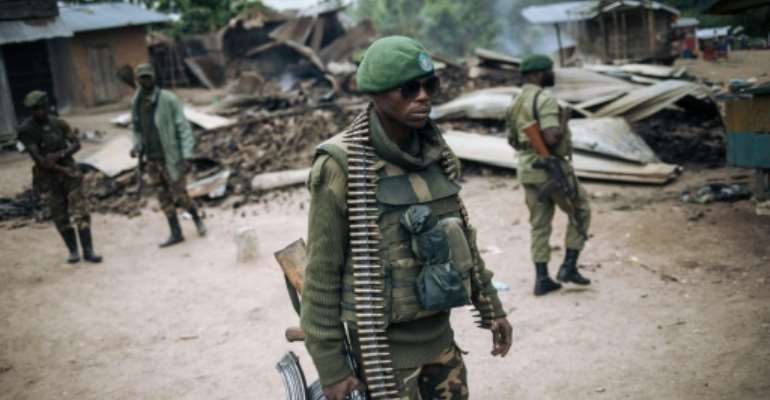 DR Congo's army has been carrying out operations against ADF militia fighters around Beni. By Alexis Huguet (AFP)

A feared militia attacked a prison in the restive east of the Democratic Republic of Congo on Tuesday, freeing hundreds of inmates, local officials and police said, as the Islamic State (IS) group claimed responsibility for the pre-dawn assault.

Two prisoners were shot dead during the breakout from the Kangbayi prison in Beni at around 4:30 am (0230 GMT), police said on Twitter, blaming the attack on the Allied Democratic Forces (ADF).

Beni's acting mayor Modeste Muhindo Bwakanamaha also pointed the finger at the ADF, which originated in the 1990s as a Ugandan Muslim rebel group and has been accused of killing more than 1,000 civilians in the region since October 2014.

"Only around 100 detainees did not leave the prison from among the 1,455 who were there," Bwakanamaha told AFP.

Map of DR Congo locating Beni, where the ADF militia is active. By (AFP)

Amaq also said IS fighters attacked a Congolese military base in the Beni area.

UN chief Antonio Guterres said he did not know of a "formal link" between the ADF and IS after visiting the region in September 2019.

"But it's clear that there are real ties, because there is recruitment in other countries (of fighters) who go to the DRC," Guterres told Radio France Internationale.

By noon on Tuesday, dozens of soldiers and police were locking down the prison and two armoured vehicles of the UN peacekeeping mission MONUSCO were on hand, an AFP reporter at the scene said.

Residents were fearful of a sharp increase in attacks after the jailbreak.

The ADF has killed 570 civilians since the army launched a crackdown against them in November last year, according to experts.

The attacks are apparently reprisals for the army operation or designed to warn locals against collaborating with the army.

Jailbreaks are frequent from the DRC's overcrowded prisons, most built before the country won independence from Belgium in 1960.

More than 900 inmates escaped from the same Beni prison in June 2017 after an attack by unidentified assailants, according to the provincial governor at the time.

He said 11 people were killed including eight policemen in a shootout during the attack.

The month before, several hundred if not thousands of detainees -- between 600 and 4,600 according to different estimates -- were sprung from the main Makala prison of the DRC capital Kinshasa.

They included Ne Muanda Nsemi, the self-styled prophet of a separatist sect blamed for deadly attacks in the country -- who was arrested in April of this year after three years on the run.

The ADF is among more than 100 armed groups operating in the resource-rich eastern provinces of the vast former Belgian colony.