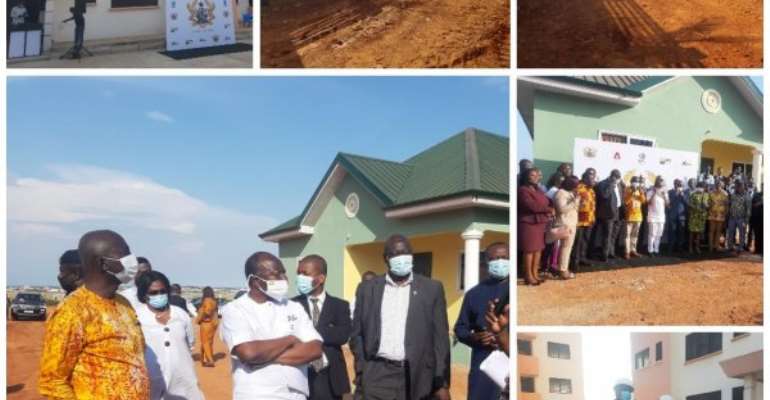 The Ministers of Finance and Works and Housing, have paid a working visit to two affordable housing project sites near Tema.

Mr Ken Ofori-Atta, Minister of Finance and Economic Planning, and Mr Samuel Atta Akyea, Minister of Works and Housing, accompanied by officials from the two Ministries visited the Adom City Estates at Tema Community 25 extension in the Ningo-Prampram District and the Community 26 Affordable housing in the Kpone-Katamanso Municipality.

One thousand, five hundred house units are expected to be delivered at affordable prices to public sector workers at the Adom City Estates which is a private initiative supported by governments and some banks.

Two-hundred and forty-five of the houses are to be provided in phase one of the project, while 320 and 400 would be tackled in phases two and three respectively.

The Community 26, Kpone affordable housing project which was started under former President Kufour's government, but was abandoned, and later handed over to the TDC Development Company Limited now has 11 blocks completed with additional 46 and 93 blocks respectively to be completed by the end of first quarter of 2021, and 2023.

The project when completed would have 304 studios, 536 ordinary one bedrooms, 800 special one bedrooms and 1,376 two bedrooms with social amenities including police post, clinic, school, recreational areas, mini lorry station, shops and infrastructures at an estimated cost of GHs 315 million.

Mr Ofori-Atta said as part of government's plans to revive the affordable housing scheme and to bridge the over two million housing deficit, his outfit established the National Housing and Mortgage Fund (NHMF) to provide capital to banks participating in the sector at two per cent to fund such projects.

He indicated that the NHMF which consisted of the National Mortgage Scheme (NMS), and the Affordable Housing Real Estate Investment Trusts (REITs) which is a rent-to-own scheme would enable individuals, especially public sector workers own an affordable house at a mortgage which must not be go beyond 12 per cent.

He disclosed that government was partnering the Ghana Real Estate Developers Association (GREDA) to provide at least 200 housing units annually, disclosing that even with the COVID-19, a pilot had successfully been completed within nine months at Tema Community 22.

Mr Atta Akyea said the government saw housing as divine, therefore, its resolve to prioritize the massive provision of affordable housing in its next term if given the nod by Ghanaians.

He indicated that at least 40 per cent of the two million housing deficit would be bridged in the next four years across the country under the scheme after the successful implementation of the pilot.

He commended the TDC, Adom Estate, GREDA, and partnering banks for taking advantage of the scheme to provide the needed affordable housing.